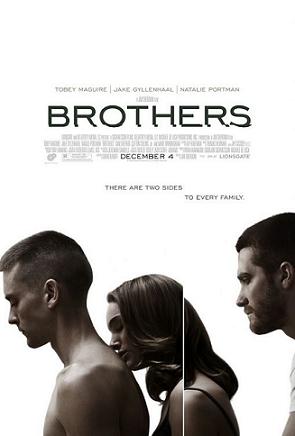 Brothers is a war-drama movie centered mainly about the importance of family, specifically brotherhood, when it comes to severe hardships.

Sam Cahill (Toby McGuire) is a Marine soldier set to be deployed to Afghanistan. His brother Tommy (Jake Gyllenhaal) is imprisoned for an armed robbery and is released shortly before Sam’s deployment. Tommy isn’t liked by almost anyone in the family circle: his own father, Sam’s wife Grace (Natalie Portman)…

While on his mission in Afghanistan, Sam’s helicopter is hit by insurgents and it crashes. Supposed to be dead, his family back in the US begins its mourning process. And soon enough, his brother Tommy decides to take up the mantle to redeem himself in the eyes of those that matter to him.

However, Sam isn’t really dead. He’s been captured, along with another soldier, and they are both submitted to severe torture methods, be it mentally or physically, so when Sam is rescued, he has to deal with the demons of his capture, putting a strain on his marital and familial life.

The performances in this movie are top-notch. Toby McGuire really impressed me, especially since the last movie I watched in which he had a leading role was Spiderman 3. He completely gets rid of the Peter Parker persona for this and assumes his character with strength. He is absolutely frightening at times.

Jake Gyllenhaal and Natalie Portman are, naturally, also very good at what they do. Gyllenhaal’s shift from irresponsible to responsible is done extremely well, while Portman is so subdued as the wife that it’s sad sometimes to watch.

The movie itself is enjoyable but not ground-breaking. What works for it is that it focuses more on the family dynamics of the story, more so than the war aspect, similarly to The Fighter (you can read my review of that here).

However, I felt that it drags on at certain points. Sometimes, the focus is on things that turn out irrelevant in the grand scheme of things, making the movie feel pointless at times. And seeing as its main focus is family dynamics after tragedy, you need to go through at least 2/3 of the movie for any emotional confrontation to happen and these confrontations are what drives the movie.

This is a remake of the 2004 Danish movie Brødre (which I haven’t seen yet), though set in a different location geographically to please American audiences. The premise of Brothers, as a movie that ultimately shows that you cannot really come back from war, is promising. But the overall outcome leaves you cold at the moments that could have been turned into something but were not. The actors do a good job with what they’re given. But that, at certain times, isn’t enough.