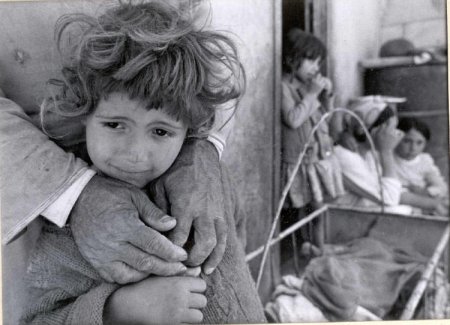 Your children are not your children.
They are the sons and daughters of Life’s longing for itself.
They come through you but not from you,
And though they are with you yet they belong not to you.

Your land is not your land. It does not belong to you.

There is nothing harder than having no home – only a transient house, or even a tent, where you sleep the night, worrying what the following day brings.

Some people have been worrying about that issue precisely – where to sleep – for more than sixty years. I am not appealing to any political reason, only humanitarian common sense. There’s a people who has had their land swept away from beneath their feet on the premise that this land does not belong to them, whose homes got ripped to shreds because they were built on a land that was not “theirs” and who are in limbo just because they were the victims of wrong place, wrong time circumstances.

The Palestinian people, and I do not mean its political figures (because those are as rubbish as garbage goes), are a collection of human beings whose lives have been torn apart by years of them being in the middle of a conflict they chose not to be part of.

I shall not go into the history of how they lost their land. After all, the history is well known (Balfour promise, etc…). But the sad thing is how this people is portrayed today: a collection of terrorists voting terrorists to fight those who are good, aka, Israelis.

Sure, the Palestinians have had their share of mistakes. They sought out a country where a country was already built and they have constantly failed to get themselves represented in the best possible way. Arafat? Abbas? Seriously?

But there’s more to the conflict than what ABC, CBS and Fox share with their viewers. There are people who are the victims of massacres against them on daily basis, whose children are used as bullet pillows and whose souls are being hammered with missiles. I firmly believe the holocaust has happened. Whether the number of Jews who died is ten million or one million, it doesn’t mean they were not ruthlessly exterminated at one point. But you’d think going through that ordeal would deter you from wanting to inflict it on another people. Not true, obviously.

I do not advocate equaling the holocaust with what’s happening in Palestine today. But I feel the human life has become of so little value in some areas of the world, it’s sickening.

However, the Arab Nakba (which translates as catastrophe) does not stop with Palestine. Arab countries are infested with dictators who kill their people ruthlessly without caring and who limit freedom, in spite of protests demanding for their basic right to speak.

The Arab Spring, which is also the name analysts have called the Tunisian and Egyptian revolutions, is slowly turned into another Nakba. Why? Sectarian clashes in Egypt against the Coptic population, just for them wanting to remain Christian in their country. Copts face daily discrimination, having to ask state permission to build churches and must indicate their religious affiliation on their ID cards.  Their schools were nationalized by the government in the 1950’s and over the last several decades they have witnessed terrible massacres. This past weekend witnessed two churches being burned and several dead. And yet, people in the Arab world have turned a blind eye on them and their suffering mean while constantly bemoaning about discrimination against Arabs. Not to mention what has happened to Assyrians and Chaldeans in Iraq, half of whom have fled for their own safety. And no it was not American troops who drove them out.

Add to that rioting in Tunisia that is knowing no end. The Libyan revolution dying a painful and agonizing death amidst an international silence that knows no limit. A Syrian revolution attempt that is the victim of people simply not caring anymore and a Yemeni revolution that’s the victim of them being so geographically distant that they have become also distant from attention.

It doesn’t help as well that the population in the Gulf suddenly got preoccupied with watching Star Academy and counting their oil millions again.

Yes, the Arab Nakba doesn’t stop with Palestine, although they are the bigger victims in it. It’s the story of a whole region of the world that allows itself to be degraded with time by incompetent rulers, indulgent people and hypocrisy without limit. The next time you protest against Israel ask yourself. Do I believe in equality in my own home? Have I treated one of my own citizens differently based on ethnicity or sect? Are people in my own state suffering because they are religiously or ethnically different? Next time you march or protest ask yourself these questions.

Pity the nation that raises not its voice
save when it walks in a funeral,
boasts not except among its ruins,
and will rebel not save when its neck is laid
between the sword and the block.
Pity the nation whose statesman is a fox,
whose philosopher is a juggler,
and whose art is the art of patching and mimicking.
[…]
Pity the nation divided into into fragments,
each fragment deeming itself a nation.

PS: Thanks to Paul Gadalla for his input in this post.

4 thoughts on “The Nakba”