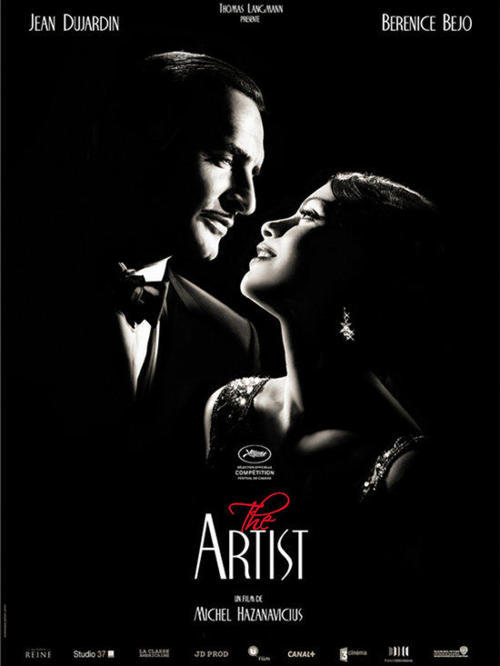 In The Artist, director Michel Hazanavicius takes Hollywood retrospectively to 1927 where the age of silent movies still reigned – all with a silent black and white movie.

Silent movie star George Valentin (Jean Dujardin) is at the top of the world. His movies are always a huge success. He’s adored by his audiences for his sense of humor and all around fun attitude towards everything. 1927 Hollywood was all about Valentin.

Soon after the premiere of his latest movie, he stumbles on a girl named Peppy Miller (Bérénice Bejo) who kisses him on the cheek to newspaper headlines. Soon after, Peppy lands a role as a dancer in one of Valentin’s movies during which he gives her the advice of needing to be different to stand out, giving her the big break she needed. And with that, Peppy starts climbing her Hollywood stairs, quickly becoming a sensation by 1929. It is then that talking movies are introduced and Valentin refuses to start speaking in his movies. The reason for this refusal is ultimately answered in a subtle and touching way as only a movie like The Artist could pull off. His career quickly deteriorates and he is forced to deal with his own pride, decisions, miscalculations – all as Peppy Miller’s career soars with her talk to unreached heights.

The Artist is a breath of vintage fresh air in a Hollywood movie scene that is relying more and more on brainless blockbuster action movies than on truly artistic cinematic features that would leave you speechless as you leave a movie theatre. The Artist is one of those movies that leave you baffled as you watch it.

Jean Dujardin is absolutely breathtaking in this. He leads a masterful, brilliant, stunning performance – all without speaking a word. It is a testament to an actor’s ability when he can communicate the struggles, emotions, triumphs and defeats of his character to the audience all through his facial expressions and overall demeanor in a movie.

Bérénice Bejo is great as Peppy Miller – the actress who is taken places because of George Valentin and who eventually leads to his downfall, feeling guilty about doing so and wanting to increasingly take care of him. You can see her metamorphose on screen from an awkward dancer who wants to get places to America’s sweetheart, who knows exactly what she can leverage out of movie makers.

Despite being black and white, The Artist is visually appealing. Soon enough, the fact that you aren’t watching a movie in color goes to the back of your mind and you start enjoying the genius of it all. The score of the movie, composed by Ludovic Bource, is beyond a masterpiece. The Artist, if you don’t want to consider it a silent movie simply because of the lack of speech, is a movie without spoken words to the melody of a brilliant symphony. It’s very difficult not to be taken into the ingenuity that is the music of The Artist.

At the end of the day, The Artist is examining the extinction of silent movies in Hollywood by giving Hollywood in 2011 a silent movie that triumphs in quality most of its talkies. And that’s precisely what this is such a great movie. It is delicate and original. It is profound and fun. It makes you laugh and it has its heartfelt moments. It might be a lament to the Hollywood age it represents but it does so without being overly pessimistic. In a way, it seems that this European movie is reminding Hollywood of its roots, of its origin. Without being technically proficient, The Artist is showing exactly how much all those extras can take away from the essence of movies. It’s showing audiences that you can really enjoy a movie that doesn’t demand anything of you except to look at shadows, black and white pictures and moving people. And in return, it gives you so much more…

4 thoughts on “The Artist – Movie Review”