We may not have an electoral law yet but our elections will happen regardless. And despite many of us saying that we won’t vote now, come June (or July if there’s a slight delay), we will all be heading to the polls to cast our votes.

The ministry of interior affairs has just published the lists of the 2013 elections eligible voters (لوائح الشطب ) and speaking from experience, it’s always better to check if your name is there or if there’s any mistake in advance in order to avoid any surprises come election day.

1 – Go to the website (here). It doesn’t support firefox so make sure you’re using Safari or Chrome or – God forbid – Internet Explorer.

3 – Next, choose your district. In my case, it’s Batroun.

4 – Choose your village. Ebrine, in my case.

5 – Choose your gender and sect.

My town has Sunnis. Unacceptable.

The list corresponding to the sect, gender and town you chose will then be made available. If you are an expat who registered at an embassy, your name will have a remark indicating that you have chosen to vote abroad:

If you’re not an expat, locate your name and make sure it doesn’t have any mistakes in your birthdate, father’s name, mother’s name or even your own name: 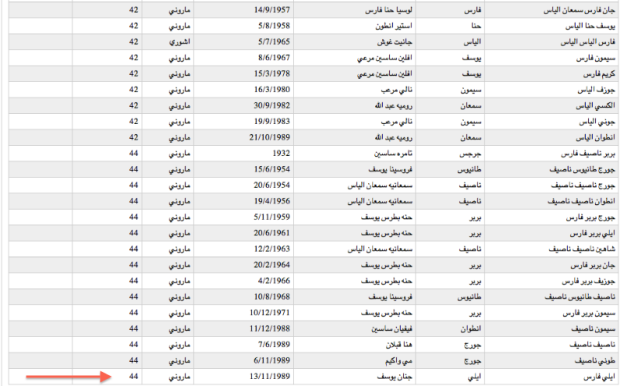 I personally had a problem with my mother’s name on the list which missed one dot, making her name totally different. I spoke to the mokhtar about it but he dismissed it as irrelevant and didn’t fix it. Remembering a story when a friend of mine was not allowed to vote by some political observers because his mother’s name was wrong on the list, I didn’t let it go and while giving fingerprints for my new ID at my district’s Serail, I asked to have my mother’s name fixed and it was.

Don’t worry, fixing anything wrong with your registration is not a hassle. Just have some form of identification with you, an ID or a recent ikhraj eid, and head to your nearest “ma2mour l noufous” and they’ll be more than glad to sort things out.

As an example, a relative whose name appears on the list for the first time this year has her mother’s name all wrong. If she hadn’t checked the list, she wouldn’t have known that and she would have been not allowed to vote come election day. Another friend, who’s my age, doesn’t even have his name registered yet. Seeing as the lists are readily available online till March, it is our duty to make sure that human errors do not keep us from voting.