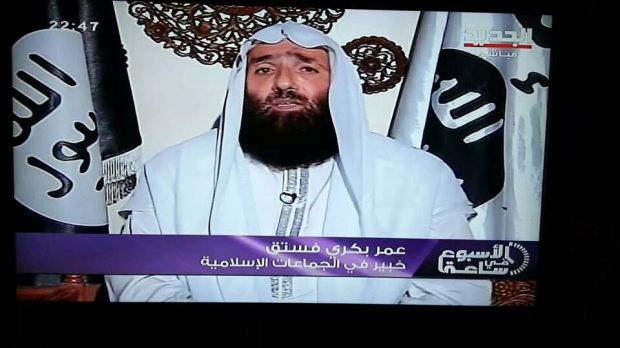 The above sheikh was hosted on NewTV earlier tonight to talk on behalf of the people of Tripoli. I guess that city ran out of spokespeople over the past few days so the TV station in question figured digging this creature up from the depth of whatever abyss he was in was a good idea. Ratings are proportional to beards.

Note that this sheikh is said not to even be from Tripoli and has not been residing there all his life to get to talk on the city’s behalf.

This man spoke about the need for self-security for himself and his fellow Sunnis of Tripoli. Did the TV station in question even bother to target this rhetoric? Of course they didn’t. This is the rhetoric they want being spewed around their airwaves lately. This is what gets people talking. This is what gets people to tune in. Of course, this is precisely the rhetoric that also gets people killed and further explosions taking place and extremism rising. But who cares about that, right?

In the process of his TV moment of fame, this creature also asked for the help and support of Al Qaeda in protecting the people of Tripoli. I’ll leave that notion hanging.

There’s a responsibility for Lebanese media to kill off such eccentrics in times when such extremism is not only unhealthy but detrimental to the well-being of everything around us. Does hate exist? Sure it does. Do people who mean harm for others just because they think differently exist? Sure they do. But it doesn’t mean we should give them air time to poison minds. You only needed to tune into FutureTV on Saturday with Paula Yaacoubian or MTV hosting Khaled el Daher as well, for the nth time, yesterday for your prime examples.

Our TV stations are still searching for the next big scoop instead of being mature and responsible in handling what seems to be an impeding civil war.

PS: If you think my blog titles have a lot of “screw” lately, it’s because we’re in a general state of screwing.

This entry was posted in Lebanon and tagged Lebanon, media, NewTV, TV stations. Bookmark the permalink.