The fact that it has been over a year that our parliament convened in session to vote for a president? Nope.

All other issues worth discussing about the country? Nope.

In order to stay up to date, little as I want to, with what’s happening in my very beloved country, I usually turn to my social media feeds. As it goes: if it’s important enough to become a twitter thing, then you should be aware of it.

Salma Hayek was a Twitter thing. A Facebook thing. An Instagram thing. A get out of my face thing. A don’t we have other things to worry about thing. An everything kind of thing. A “are we seriously still talking about this” thing. A “awwww Lebanese pride, bitches” thing.

It had been a while since I saw my country, even if from afar, kiss ass in such a glorious way. Not only was the nation all over Salma Hayek’s Mexican-American ass, we were also salivating all over it, begging her for the minimal and most mundane of acknowledgment. We are here, we matter, recognize us please, breathe our air please, share our sewage system we beg you.

1 – We Gave Her A Freaking Citizenship

Salma Hayek’s grandfather was Lebanese. Sure, she has “legal” right to get the citizenship, but so do a whole lot of other people of Lebanese origins who have been blessed by the Almighty Lord to have the semen-given part of their genome be Lebanese. Salma Hayek lands in the country and not only do we run to give her a citizenship, I bet we also gave her a very nice “golden” civil registry number. I’m also sure her national ID card number was golden. Her passport number? Platinum, I bet!

Certainly, Salma Hayek should get our citizenship. Because being Mexican, and American and being married to a French guy are definitely not enough. Lebanon trumps them all.

I usually associate Kalam Ennas’ special episodes with matters of national crisis that require the country to halt all programming in order to accommodate the necessary political diarrhea to be spewed. Not this time.

What’s your name, Marcel would ask. Salma would answer. He’d sit dumbfounded. She was proud of having Lebanese heritage, as if it was a multiple choice question with more than one option. She forgot her purse at the terminal because she was pre-occupied with the Cedar she was given. They ran after her. She didn’t care, mostly because she has 46342753851371357 other purses, because that Cedar was her whole country. 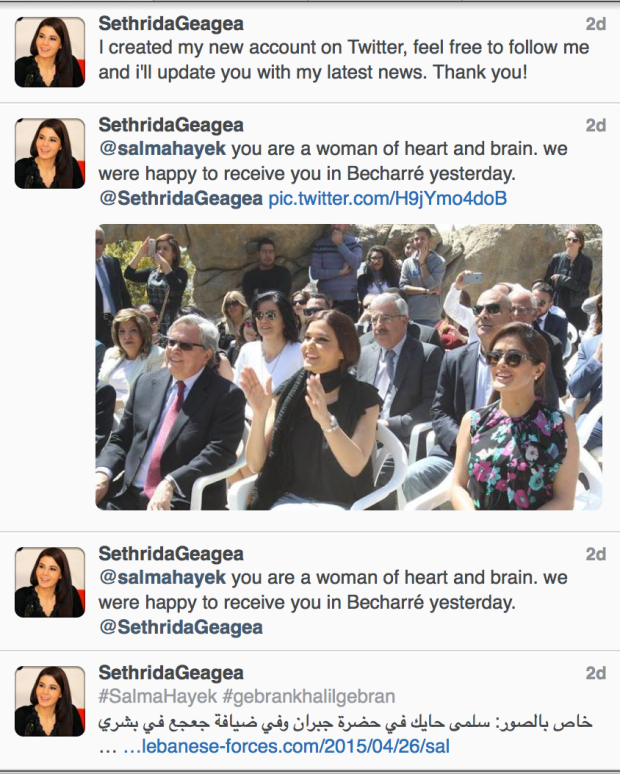 In order to capitalize on the buzz that was generated by Salma Hayek visiting Bsharre and the subsequent fashion showdown, Sethrida Geagea decided to join twitter. She has tweeted 4 times so far. 3 of those 4 tweets are about Salma Hayek and her visit to Bsharre. Of course, Lebanese media did not see it from this perspective because they were pre-occupied with the fact that Sethrida Geagea was better looking than Salma Hayek.

How is that possible? A Lebanese is better looking than a Hollywood star? How could that be? Is it even remotely possible that Salma Hayek could be human and not the God she was made out to be? What does Samir think about all of this? Next time, on Lebanese Serial.

4 – We Suddenly Cared About Syrian Refugees

It took Salma Hayek visiting the Syrian Refugee camps for those refugees to become news again. Were they important enough during Lebanon’s relatively harsh winter? Nope. Are they important in absolute value? No. But we can’t let Salma Hayek know we don’t care. So for the few days she was here, of course we’d show how much we cared for those refugees… as long as we capture that perfect Kodak Moment in order to show how much we care to the whole wide world.

Don’t you see those poor babies? That huggable little girl? All those miserable people in subpar conditions? Don’t let anyone tell you we’re not helping them… We made sure Salma Hayek visited!

5 – The Prophet Is Now Everyone’s Favorite Book. Ever.

In between all the mania surrounding her visit, I bet Salma Hayek almost forgot why she was here in the first place: to promote her upcoming movie to the country that made it.

Yes, it technically premiered at Cannes last year. Yes, there was also technically a premiere at Doha earlier this year. Yes, the book on which the movie is based was written in the United States and in English. Yes, Salma Hayek probably came here because part of the funding of the movie was via a Lebanese bank.

But goddammit, no. She’s here to show how proud she is of her Lebanese heritage, which is clearly exemplified in The Prophet, a book about how the wonderful stringing of words together can be and how easy it is to repeat them at funerals, weddings, graduations and other miscellaneous occasions.

Subsequently, The Prophet has now become Lebanon’s official favorite book, even possibly beating The Bible and the Quran. Don’t let priests and sheikhs know, though. “Your children are not your children” has been quoted so many times I’m beginning to search for children that may not be mine.

I bet the movie will be the movie of the year too!

A picture is worth several hundred words. How about a bunch?