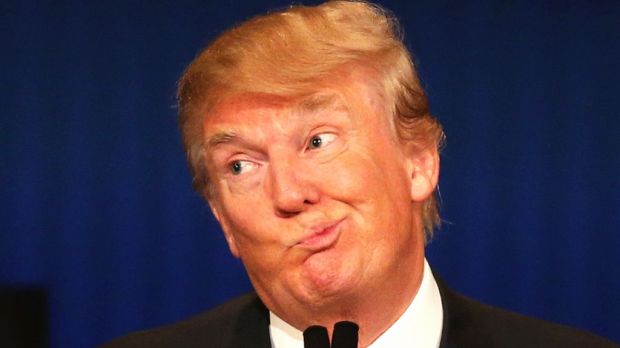 With each passing day leading up to America voting on November 8th, there’s a growing conviction that gets reinforced in my head, and that is that the Republican nominee cannot but have some part of him be Lebanese. It’s just the way it is, no genetic testing needed. And this is why.

He’s a politician who hates women:

From statements about him just grabbing women “in the pussy,” to making women feel inadequate about the fact they get their period, to calling a former Miss Universe “Miss Piggy” for gaining weight, to believing that pregnancy is a nuisance for his business, to him believing that sexual assault in the military is obviously logical because the two genders are mixed.

The examples are endless. This link (here) is just a brief summary of some of them.

Of course, while such statements are absolutely horrifying for Americans (even though around 43% of them still want to vote for him), they are only second nature to us as Lebanese. How could they not when we’ve got full blown MPs who think women should be blamed for being raped?

He’s gonna build a wall, a wall that will be so YUGE!, and who’s gonna pay for that wall? SYRIA! Oh wait. Never mind. Had a little mix up there.

From his anti-Mexican statements, to his overall anti-anything-not-American-Blonde-and-White rhetoric, to turning a blind eye to KKK members campaigning for him, to questioning if Barack Obama was born in the United States, the examples are also – once again – endless.

Not to say that *all* Lebanese are racists, but man, those refugees are just ugh! And can you imagine sharing a pool with a maid? What is this, Colonial Africa? And what’s to say about our minister of foreign affairs? Of course he’s right about not wanting to give Syrians or Palestinians who marry Lebanese women the precious Lebanese nationality. America has KKK, we have 961.

He doesn’t pay taxes and is proud of it:

When interrogated by Hillary Clinton at the first presidential debate about his taxes, alluding to him not paying them, Trump replied: “that makes me smart.” A few days later, the New York Times risked legal action to leak part of his tax returns showing he didn’t pay anything for over 18 years because of being able to manipulate the American tax code like a pro.

His Republican aids came to his rescue. Rudy Guliani turned him into a “genius” for doing what he did, saying that that alone made him more capable to lead the country than “a woman” (refer to point #1).

Americans (not the 42% still voting for him at least) were outraged. Gasps were reportedly heard among undecided voters being used as focus groups during the debate at his tax statements. How could he get Americans (again, not those 42%) to feel like they are “less smart” for actually contributing to their country?

In this side of the world, however, Donald Trump not paying his taxes doesn’t make him smart at all. It makes him just another regular Lebanese. Income tax? What is that again? Electricity Bill? They don’t even dare enter my neighborhood to collect man. Water? Meh, it’s not like they’re gonna cut me off anyway. VAT? Haha, I’ll buy using my foreign passport. 😉

He wants to ban Muslims – all 1.6 billion of them – from entering the United States because a small faction of them, numbered at less than 10,000 individuals worldwide, are terrorizing people.

When his statements were demolished by Khizr and Ghazala Khan, the parents of United States Army Captain Humayun Khan who gave up his life saving his fellow soldiers, Trump’s response was not to apologize, but to allude to Ghazala not speaking to her being an oppressed Muslim woman.

The memory of her son was still, years later, too much for her to bear to address the entirety of the United States.

In these parts of the world, the hate of others for being of a different religion on both sides is existent, albeit not applicable to everyone thankfully. The deeper you go in the Lebanese Bible or Quran belts, the more engrained is the mentality that those who pray differently are to be feared. It takes a lot to break out of that.

He lies about everything all the time:

He comes up with one lie after the other, believes them, and refuses to be fact-checked. Wasn’t it about 90 seconds before he dropped his first lie at the first Presidential Debate?

His Lebanese brethren practice this dogma to the letter. Fact checking is irrelevant here. If it’s my opinion, then it’s a fact and you better deal with it, Lebanon-style.

His top advisor is Lebanese:

Walid Phares – no relation, thank God – is one of Donald Trump’s top advisors and councils him on a lot of issues, notably foreign affairs. Phares’ personal history is relevant for being a Lebanese Forces officer during the Civil War, and leaving to the United States while still retaining his “Christians are better than everyone else because they are Christians” mantra (read point #4).

During the 1980s, Phares, a Maronite Christian, trained Lebanese militants in ideological beliefs justifying the war against Lebanon’s Muslims. Justified back then, perhaps and debatable, but he hasn’t left that mentality behind. He was also a main contributor to the planning behind the Sabra and Chatila massacres.

Birds of a feather flock together, Lebanon style?

Fails at so many things, brags anyway:

From failed universities, to failed steak ventures, to hotels driven to the ground, his career hasn’t exactly been the beacon of bright light that his father’s “small loan” of $14 million kickstarted.

That hasn’t stopped Donald Trump from making sure that everyone and their mother knew that:

In Lebanon, one may be starving but one would never ever dare show it. One must always buy the fanciest of clothes, go to the most expensive clubs and pretend that life is nothing but instagram-rich-perfect 24/7. Then you go home and decide water is enough for dinner (Evian if with friends, tap if at home alone). Or when you’ve barely made it through your bachelor degree but call yourself a doctor anyway.

Lebanon, this doesn’t apply to every one of us, but many have such traits let’s not beat around the bush, as do most of our politicians. Let’s get rid of them like America will (hopefully) get rid of our export to them?

8 thoughts on “Why Donald Trump Is Probably Part-Lebanese”