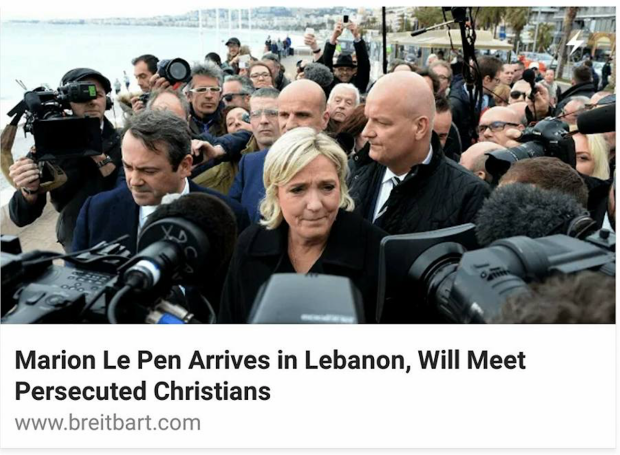 Apart from having her as their French presidential poster child, alt-right news website Breitbart, whose spread of fear, hate, xenophobia, and racism under the guise of “political-uncorectness” had a lot to do with the rise of Trump and friends, decided that Marine Le Pen is in Lebanon to meet the country’s persecuted Christians.

Of course, the purpose of this visit was always for the French far-right candidate to “express solidarity with Middle Eastern Christians.” As I said in my post on the matter, perhaps that purpose is better served in areas where Christians are actually persecuted?

Not according to Breitbart, of course. To them, what are countries over there *points disgustingly to the Middle East* but a pile of horrifying terrorist places feeding off Christian pure-blood and ruining the world for everything else?

So dear Breitbart, can you please point me – a Lebanese who was raised Maronite Christian – in the direction of this scary entity that is persecuting me, as I enjoy this fine Lebanese morning while Marine Le Pen enjoys her visit to the only country that’s accepted to host her so far, while I get nauseated reading your website?

I am sorry to inform you that your feisty title to get your Western Islamophobic readers up in arms and to portray Marine Le Pen as the Joan of Arc of France’s fight against the world will not come at the expense of my country or your dramatization of my situation in it.

You see, if you had any inkling about Lebanon or about the Middle East in general apart from it being one big blur in your eyes, you’d know that the political system in Lebanon allocates political power to Christians and Muslims equally. You’d have known that the president Marine Le Pen met has to be Maronite by law and that to be elected that persecuted Christian man held the entire country hostage for almost two years. But please, by all means, tell me more about how I’m persecuted.

I don’t feel unsafe in my country for being a Christian. I won’t get beheaded for going to Church. I won’t be shot down for reciting an “Our Father.” I won’t be knifed for crossing myself. Please, keep your disgusting concern to yourself and don’t reflect it on this country to try and pass on your agenda.

Are Christians persecuted in the Middle East? Sure, they are. But that persecution is happening in actual war zones, where everyone is getting killed regardless of how they pray. It’s sort of like the war zone in your minds where facts and common sense are getting massacred. Should we hold vigils for those? R.I.P. Logic. Waiting for their article about Marine Le Pen refusing to wear a veil to meet the mufti. That one should be exquisite.

I daresay we can’t blame Breitbart for being this ignorant. It comes with the territory of being them. Even the comments on that Marine Le Pen article are horrendous, of which here’s a sample:

The more troubling part is that their sentiment is echoed by some Lebanese politicians and a lot of Lebanese-French (check the comments on these pictures 1 – 2 – 3 – 4): 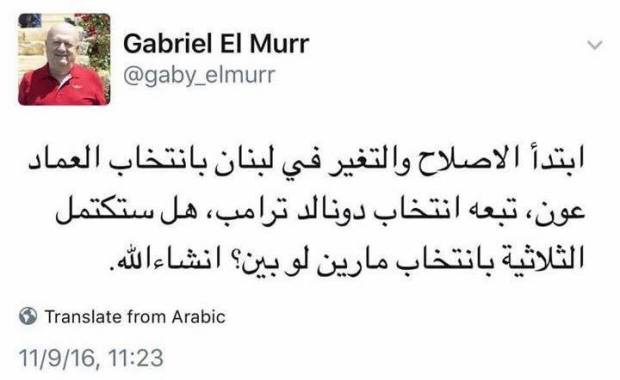 This is also not the first time that this level of misinformation and ignorance is spread about the situation of religious communities in Lebanon. During the American presidential campaign, Jeb Bush said: “if you’re a Christian in Lebanon, you’ll be beheaded.”

I suppose both Jeb and Breitbart would be disappointed to learn that I still have my head?

In Lebanon, everyone is screwed. The beauty of it is that it’s not the threat-to-their-lives kind and they are all screwed together, for better or for worse. Sorry to disappoint you Breitbart, but you’re barking up the wrong tree here.