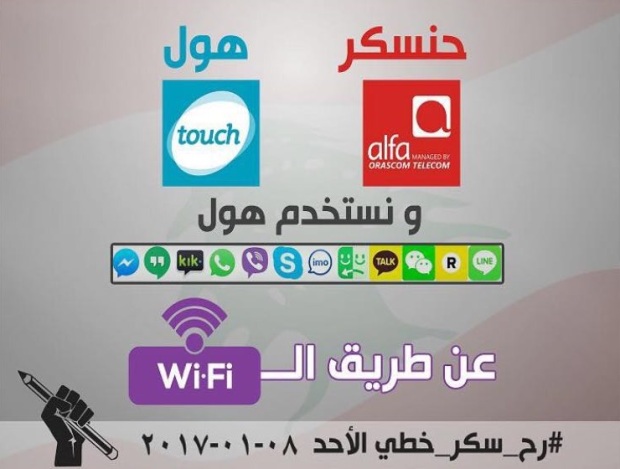 Over the past few days, we’ve all seen the above screen-grab in one way or another asking Lebanese citizens to stop using Alfa and Touch’s mobile services on Sunday January 8th, in an attempt to raise awareness and fight the horrifying corruption infesting our telecommunication sector.

Lebanon has one of the highest telecommunication prices in the region and the world. For comparison, the average prepaid monthly recharge in Lebanon is around $25 while it’s around $7 in other Arab countries. The services we get with our recharges are also abysmal: a minute is 25 cents, a text is 5 cents and mobile internet is recharged separately at rates that are exorbitant: $23 for 5GB on Alfa and $29 for 6GB on Touch  with extra-use rates of around 7 cents/MB that run up your bill into the stratosphere. And to think those rates were more expensive….

A lot has been said about the aforementioned campaign, and many are saying there’s no point because, for a lot of Lebanese, they’ve already paid Alfa and Touch by recharging their prepaid line or renewing their internet bundle. But that’s not true, because a one day boycott will cost Alfa and Touch a lot of money.

Food for thought: If those affected by this boycott weren’t worried, they wouldn’t be launching the campaign that they are currently undertaking against it. Also, your personal rights are way more important than any political undertone that has been painted over this campaign.

In numbers: The 2015 estimated revenues from mobile telecommunication to the Lebanese government were around $1.28 billion, which translates to about $3.5 million daily, encompassing texts and calls as well as internet and other services. That’s a lot of money they’re making for the horrendous services we get. A one day boycott will stop both companies from making approximately that much, without adjusting for further increase in their revenue that they’ve made in 2016.

With a wide enough boycott, Alfa and Touch will also suffer losses from the fact they have to invest in keeping their networks running without those networks being used: they are supposed to keep their networks at maximum capacity to accommodate the usual influx. With no influx taking place, they will run up the losses.

Perhaps a boycott isn’t the ideal way to bring about the change we want. But the point is not to remain apathetic anymore to the fact we, as a country, are being ripped off without anything to be done about it simply because this is our status quo and we’re forced to deal with it.

Call it slacktivisim, short-sighted, or whatever you feel like. But putting my phone in airplane mode for the day won’t affect me much, but it could get both companies, and therefore our government, to realize that their current rates and policies are unacceptable. Morocco did it when their government banned VoIP. KSA did it when their ISPs raised internet prices. It works.

As an ending note: if you go France, you can get a phone line from a company called Free for around €20 a month. This includes: unlimited calls inside France to all lines, unlimited calls from France to mobile phones internationally to many countries around the world, Lebanon excluded, unlimited SMS and MMS, unlimited mobile internet, and free wifi when you connect to Free’s Wifi Hotspots on streets. That is all.