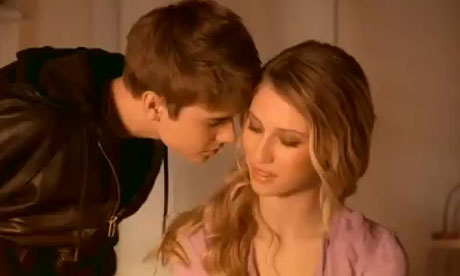 Not only is it horrifying to see Twitter constantly filled with teenagers who call themselves “Beliebers” (Yes, how atrocious can that get?) but they’re literally everywhere. I thought we didn’t have those in Lebanon until I was linked to pictures of the premiere of Justin Bieber’s movie and let’s just say, the country has another kind of infestation going on as well.

Well, Justin Bieber is doing what most singers do when they reach mass hysteria level of fandom: release a perfume. It’s just that it didn’t click in his head that since he’s supposedly male, the perfume should be addressed to his own gender (not that I’d buy). So he made a perfume designed especially for his fanbase, which I’m assuming is mostly screaming girls.

So dear little girls everywhere attempting (or already done so) to throw things at your computer screen for me dissing the husband-to-be that you will never have, come this June, you will be able to smell the way Justin Bieber wants you to.

And if you take the perfume ad he filmed to the letter, whenever you put on this awesome perfume, Justin Bieber will magically appear in your room, smell you, and take you on a journey you will never forget and then depart. Don’t let your head wander, little girl reading this. Your mom won’t be too happy to know you have such thoughts (or it might just be me, in which case, my apologies).

The perfume is named Someday. I have no idea if that’s supposed to be a lyric of a Bieber song but it might as well be the key to give false hope (see above paragraph) to the millions of girls who will rush to buy this, hoping that someday, they will become the “Kate Middleton” of women, except by the time Justin Bieber feels like getting married, he’d hopefully be long gone into the realms of forgetfulness.

This is Someday’s ad on YouTube, where it already has over one million hits so far:

The ad also has its own YouTube page where Justin Bieber “gives fans a personal invitation and intimate access to his heart” through the fragrance. The girl in the ad is apparently named Dree Hemingway and she is the great granddaughter of Ernest Hemingway.

I don’t know about you but I will be very happy when this phase in human history ends.

4 thoughts on “Justin Bieber’s Perfume… For Her”