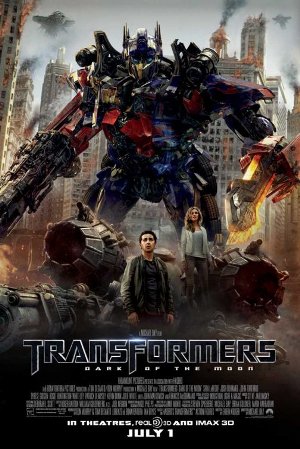 It’s not hidden from anyone that I really enjoyed the first two Transformers movies. So when the news that a third one was being prepared surfaced, I was both excited and cautious. After all, the other previous movies were a sight to see, a true cinematic experience in everything bombastic so I was positive this one would be at least as visually satisfying. But there was no Megan Fox in it and how far can you stretch a story about aliens and robots that turn into cars and vice versa without stretching it too far?

Transformers: Dark Of The Moon is probably my favorite movie of 2011 so far. If Thor had ignited this year’s summer movie season, Transformers 3 is burning and torching the field left and right, up and down. And then down. And then up. Just for good measure.

Shia LaBeouf returns as quirky Sam Witwicky, the guy always at the wrong place and time when it comes to this alien species of Autobots and Decepticons. He’s all grown up now, freshly graduated, and searching for a job. Megan Fox dumped him and he replaced her with an even hotter girlfriend named Carly, portrayed by Rosie Huntington-Whiteley, a newcomer British actress. Carly has a job, working for her shady employer, played by Patrick Dempsey, who is more on the McDreary side than the McDreamy side here. And let’s just say, Sam Witwicky has got some kick ass luck when it comes to hooking the undeniable hotties of the world.

But the story of the movie starts decades before Sam was even born and builds on the conspiracy theories revolved around man’s landing on the moon. In the early 1960s, an Autobot spacecraft crashed on the dark side of moon. It was discovered soon after by the humans, launching the space race between the US and USSR. In 1969, Neil Armstrong lands on the moon. He utters his famous words and then everyone loses contact with him. That is everyone except 35 people in a locked NASA room. They investigate the spacecraft and return back home. Soon enough though, missions to the moon are canceled and all of the info is buried in Sector 7.

But the Autobots discover a fragment of that spaceship in Chernobyl and set out to recapture their long lost leader from the wreckage. But the Decepticons are more deceptive this time. They have infiltrated the human rankings like they’ve never before. They have allies in the least excepted of places and their plan is devilishly well-woven.

Transformers 3 is such a gloriously visual movie that you are transfixed from moment one and left as such well into the credits. Granted, I love the Paramore song so that’s why I stayed, but still. It’s a two hour and a half movie that leaves you staring at the screen for most of that duration. We can talk forever about those visual effects. Absolutely stunning. Glass-shattering, robots transforming, things exploding, people flying and frying… everything was so meticulously done with the utmost consideration for detail. The creators of this movie knew their strong suit would be the visuals and they did well by excelling in that regard.

Speaking of the duration, the storyline around the 1969 landing and the spaceship on the dark side of the moon could have definitely been cut down by about ten minutes, shortening the movie by a little amount. But I’m not complaining, I loved every minute of it.

The storyline is drastically different from the first two in the sense that you don’t need to have watched the first two movies to understand what this one is about. It starts off from scratch, serving at some sort of reboot for a franchise that some felt was sagging with its previous outing. I still do not get, however, how mankind is still oblivious to the fact that such alien species roam around us. Haven’t they effectively almost destroyed a bunch of capital cities in the previous movies? And why does Sam have to be leading a crappy life (girlfriend aside) whenever each movie starts? The character actually wonders if the government should give him a job, right at the beginning of the movie. And I have to agree. The storyline could use some tweaking for continuity and logic but it works for what it is.

On the acting side, you can say that most of the actors and actresses in the movie are, in biological terminology, linker sequences. How so? they help bring the movie together but their overall role is somewhat useless. Or if you don’t want to be harsh, you can question its use or think it is somewhat in the eye of the beholder so to speak. Is there much use for Shia and the new hottie Rosie in this movie? You might say they serve as some sort of catalyst. But that’s pretty much it. Even if you take them out, you’d still be left for a very solid movie. They just add to it. After all, one of the opening scenes has Rosie strutting around in underwear. Just saying.

Overall, Transformers 3 is an awesome addition to the franchise that carries it. It is a highly, highly (yes, twice for emphasis) movie that allows you to sink right in. It is huge in the sense that it submerges you with its grand sounds that accompany the eye-popping visual effects. Michael Bay presents a movie that is much better than the previous Transformers movie, although I still stand by Revenge of the Fallen being a good movie as it was. Some great actors were featured in very minute roles, such as John Malkovich in about five minutes of screen time as Sam’s employer and legend astronaut Buzz Aldrin has a cameo at one point. He was one of the original astronauts who landed on the moon. At the end of the day, Transformers 3 is a movie that you know you’re going to watch because of its metal-crunching and awesome action sequences. You do not expect to go there for some heavy mental stimulation. And for what it’s worth, it delivers brilliantly.

8 thoughts on “Transfomers: Dark Of The Moon – Review”