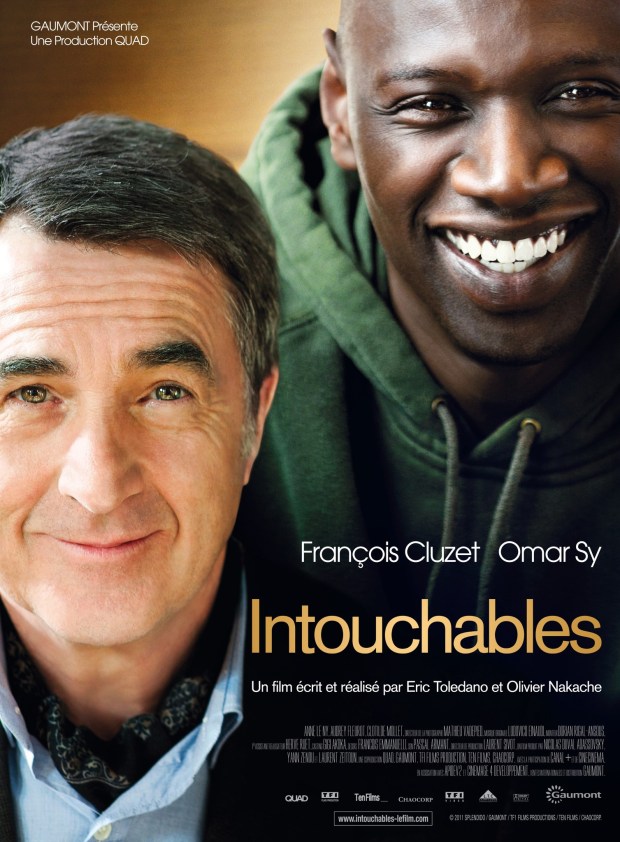 Based on a true story, Intouchables is the movie that took French cinema by storm last year with it breaking admission records and setting itself as one of the biggest movies in French history.

Philippe (Francois Cluzet) is a very wealthy French aristocrat who is also paraplegic and in need of a caretaker. It is then that Driss (Omar Sy) presents to his place in order to get a paper signed for social service, after serving a stint in prison for robbery. Instead of signing the paper and letting Driss go, Philippe takes a chance on the African man and hires him as his caretaker because he figured someone with Driss’s background won’t feel bad for his condition, not knowing that the relationship these two men will spring up, against all odds, social stigma, boundaries and hardships, will change the course of both their lives forever.

This French comedy transcends its genre to become a truly heartfelt story that will tug at your heartstrings as it makes you laugh and smile and get invested in the friendship between Philippe and Driss. Hollywood journalists have been criticizing it for its tendency to get racist at times and that is categorically incorrect. Simply put, those reviewers have not really understood the movie and the jokes may not have translated well to them. How can you convince an American that the joke of Driss looking like Barack Obama in a tuxedo is actually funny and not a pejorative measure of their president? In reality, Driss is not even black. He’s Arab, as the movie shows in real-life segments before the credit rolls. In reality as well, the movie is nowhere near racist – unless by racism you mean showing a typical white man the life of a youth, who happens to be black. Intouchables is also socially accurate – people do judge you differently based on your ethnicity, whether we like to admit it or not. The movie, however, doesn’t judge its characters. It just lets them be. So for those who keep an open mind, there’s no way Intouchables won’t touch you in a way or another as it flips through its scenes, all to the backdrop of either gorgeous Parisian scenery or beautiful French countryside.

When it comes to the acting, Omar Sy and Francois Cluzet’s performances are a crucial central pillar to the movie. In fact, both actors jump off each very smoothly with charming chemistry that can only lead to help the movie’s comedy subject matter to get passed on to the viewer. It shouldn’t come as surprising that Omar Sy actually beat Jean Dujardin for the Best Actor Cesar this year. His performance is nuanced, very sharp and absolutely spot on. On the other hand, Cluzet balances him out quite well and, despite his character’s seriousness and it being grounded. The overall mix of the two is a duo that will entertain you for every second the movie is playing.

Never have I been surprised by a French movie since Amelie Poulain. And while Intouchables doesn’t quite dethrone that movie, it sure comes fairly close. It is a feel good movie that succeeds at what it’s supposed to do. It boasts great leads, a terrific supporting cast, some chilling music composed by Italian composer Ludovico Einaudi. It is a movie about the “choc des classes,” which will leave you shocked as to exactly how much it works.