I have Samer Saade, the Maronite MP of Tripoli (he’s from Chabtine in Batroun originally), as a friend on Facebook. Yesterday afternoon, he posted a link (click here) to amendments that he, along with MP Nadim Gemayel, proposed to the non-smoking law.

MP Saade posts many links to things he’s doing. I usually read them and, like many other Facebook users, go on without commenting or “liking” the links. This time, however, I wanted to voice in my opinion. I figured the worst case scenario would be he’d read it and ignore it, like many other Lebanese MPs.

But MP Saade actually replied. This is the conversation that happened (click here for a Facebook link): 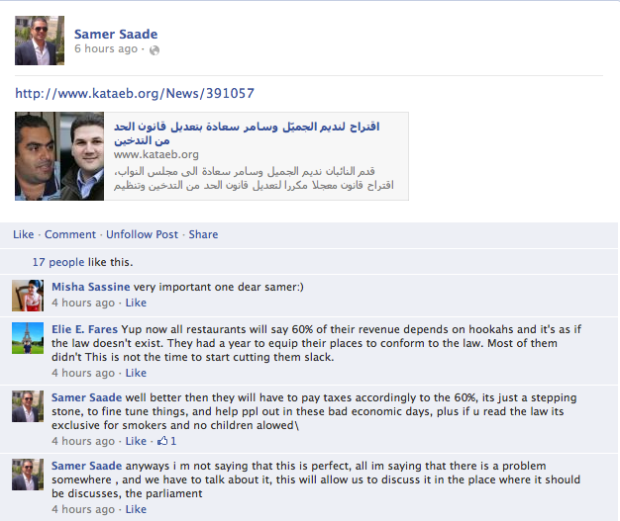 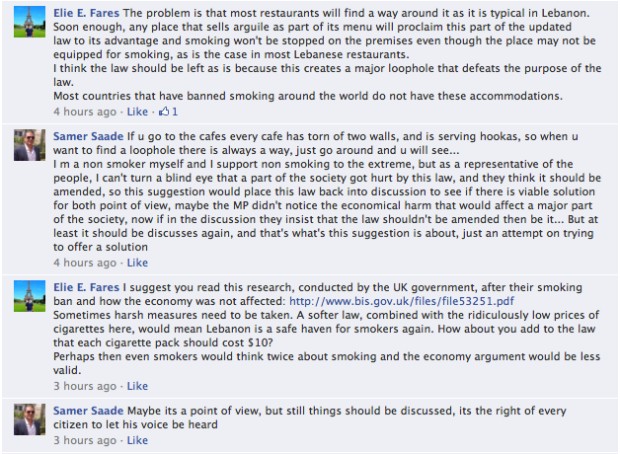 The problem with discussing the law in parliament, as I made clear to MP Saade, is that it won’t be a real discussion whereby the voice of those who want the law in its current form is heard. The amendments will pass. And it will be as if we had no law in the first place, which is a shame since I really like smoke free Lebanon.

How awesome is it to go clubbing and not get out of the night club with your underwear smelling like an ashtray? And who thought that was possible here?

Either way, more MPs should do what MP Saade does and that is communicate with their voters. I remember some newspaper writing about how he replies to the birthday wishes he gets on Facebook. It may not be much but I know for a fact that he’s also active on the ground – at least in Batroun.

In some countries, the voters in any district can call their representative to let him/her know where they stand regarding a certain bill or amendment or law. Of course, we’re nowhere near that level in Lebanon. Our MPs are always put on a pedestal. But I, for one, at least feel better that one of the people who will discuss the law knows that there is someone who’s against those amendments.

Of course, the conversation ended as only an MP can end it: with the idea that everyone should be heard. We all know that is far from being the case but some things are better left unsaid. At least to an MP.

Now the question is: how will the many, many others who share my opinion regarding their amendments get their voice across?

For reference, you can read what I wrote about the smoking ban here and here.

5 thoughts on “A Facebook Discussion With a Lebanese MP”