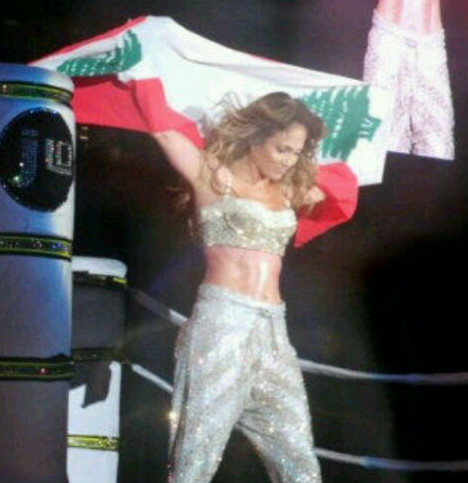 Soon enough, everyone was talking about exactly how genuine a person Jennifer Lopez is and how honorable it was of her and how proud they are as Lebanese that their – our – country was recognized this way. Well, they thought wrong.

A friend of mine who went to the concert in Dubai told me that when she grabbed the Lebanese flag, Jennifer Lopez shouted “Dubai!” which meant that she thought our flag was that of the United Arab Emirates. I’m surprised no one bothered bringing that up till now actually.

It is always customary of artists going for concerts abroad to hold the flag of their hosting country. Jennifer Lopez didn’t bother with the UAE flag. Isn’t that an insult to the country that actually paid enough to bring her to sing on its grounds? And what makes Lebanon so important that she’d rather hold our flag at a concert not even held on our land?

Our sense of fake chauvinism knows no limit it seems.

Lebanon has its flaws. It’s a hopeless place to live in sometimes. It has a lot of shortcomings and I’ll be the first to point them out as I’ve done many times (here’s a sample). But I don’t need Jennifer Lopez holding my country’s flag for me to feel overwhelmingly happy about the country I live in. And frankly I find it sad that some Lebanese need this “validation” coming from a pop star of their country for them to feel some ounce of national pride which so ironically happened to be on a national day that they are too willing to dismiss as absolutely useless.

Jennifer Lopez doesn’t know what Lebanon’s flag looks like. She probably doesn’t even know we exist. The whole flag debacle is all mere irony. Now how’s that treating your silly national pride?