Myriam Klink and her revolution took it to her Facebook profile (link) to announce that she will be running for the Orthodox seat in Metn in Lebanon’s upcoming 2013 elections. She joins another model-turned-politician-wannabe called Nathalie Fadlallah who runs a modeling agency in seeking a parliamentary seat in the Northern district of Koura.

Klink wants to go parliament in a super mini skirt and give people electricity and development. I know a few things that will get “developed” in parliament if she wins. If you know what I mean. 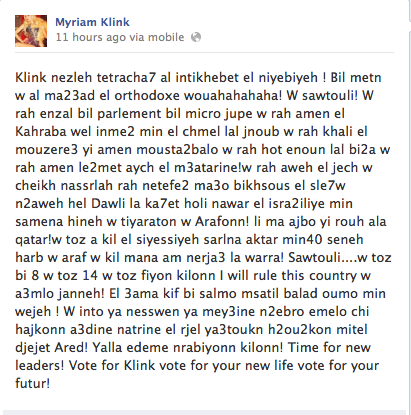 With the current political blockade of the country Klink doesn’t stand a chance if she goes through with her plan. But I actually agree with a few points that she raised there especially when it comes to women rights. She may not be nowhere near qualified, not that most of our MPs actually are, but she might as well bring a breath of fresh air – no pun – to parliament.

So the hell with it – why not have Klink run for elections?