You’ve probably been inundated by picture of the town of Betchay in the Baabda district who issued an impromptu curfew on “foreigners.” It is reminiscent of something the municipality of Bhamdoun did back in August which was more precise and didn’t nearly get the same attention (link) – the issue of the Syrian refugees hadn’t been this thorny back then.

The picture below is of the banner in the town that has gotten the country talking: 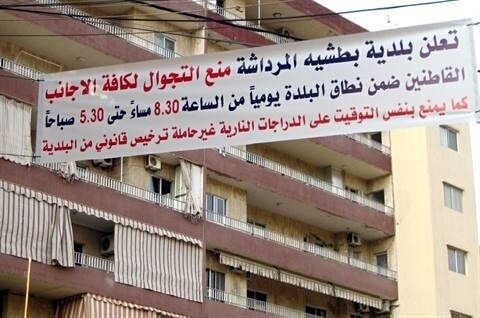 What you may not already know is that the issue hasn’t been exclusive to Lebanon’s online community with us discussing it over and over again and the issue not reaching any form of “higher” authority.
Lebanon’s ministry of interior Marwan Charbel knows about the municipality of Bechtay’s decision. He knows it’s illegal for them do so. But he won’t take any measures. If you don’t believe me, check out the following picture I took of the highlights of his interview with LBC: 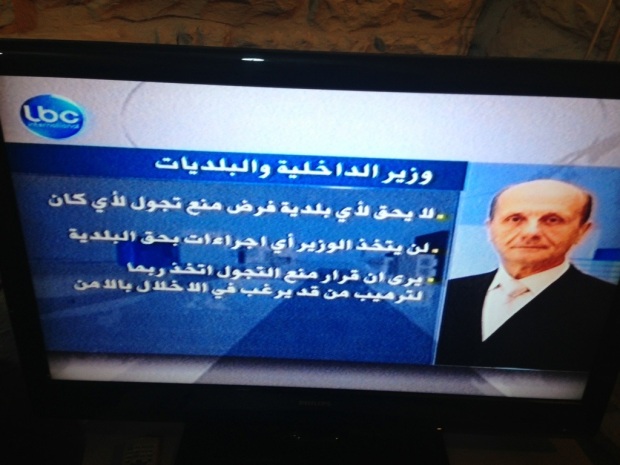 To “clarify” his decision not to pursue the illegal matter, he said it could be the municipality’s way of pressuring those who might want to mess with its security.
As if that is remotely acceptable.

The Municipality of Betchay is racist, yes. Their mayor went on TV to say the following: “We obviously mean Syrians with “foreigners” because French and Europeans won’t be driving Vespas after hours in our village.”
And despite such statements, our minister of interior still wants to let things slide. What can you expect from someone who believes a bomb exploding in Tripoli is “a bunch of people playing with it?”

The problem isn’t that the municipality has a backward mentality that should not be accepted. It’s with an administration that is so entrenched in apathy that they’d rather let such grave violations slide without doing anything about it.

I don’t care what the municipality of Betchay’s justification behind such a banner and decision is. If any entity in this country, especially one that is supposed to run the affairs of other people, broke laws in such a flagrant way, it should face the repercussions that such illegalities entail. It shouldn’t face an over-philosophical minister who doesn’t want to do anything about it.

Lebanon currently has over 300,000 Syrian refugees. They are spread across the land. All our towns have Syrians currently in our midst. The difference is our towns didn’t see it fit to break the law in order to prove a point that is mute to say the least. Not that it would matter anyway with Marwan Charbel in charge.

Let’s categorize this as a massive failure in humongous scales. Now who wants to play hide and seek with a few Khaybar missiles? No one will mind.