Let’s call it the war of pre-electoral billboards like you’ve never seen before: two regions, many kilometers apart, fighting over the same man with fiery reformative, empowering, pride-filled slogans.

As I was driving back home to Batroun last Saturday, I was surprised to see a Keserwani-centric propaganda for Gebran Bassil all over the bridges stretching across the highway. 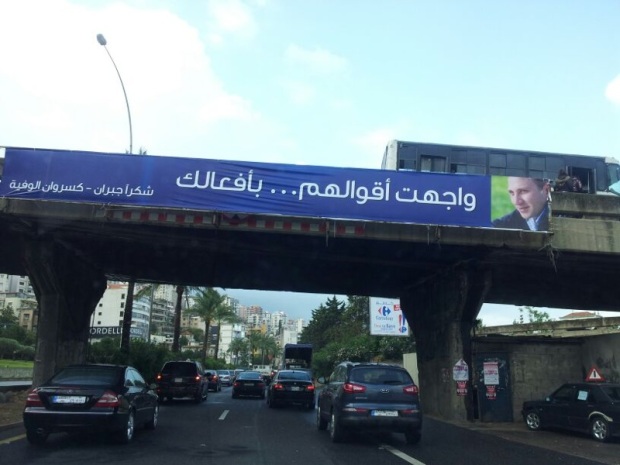 Thank you Ismail Sakalaki for the picture

The question couldn’t not ask itself in my head: Is Gebran Bassil running in Keserwan this time around?

It made electoral sense for him to do so seeing as his chances in our home district are next to nil, something even people from his entourage agree on.

But something didn’t add up. Why would I have to answer several polls over the past few months about elections in Batroun in which he was presented as the main candidate for the March 8 side of Lebanon’s political spectrum? Aren’t those polls run by political groups who want to test out how the wind in a certain region is blowing?
And why would Gebran Bassil be doing electoral visits across Batroun to many households and villages over the past few months if he doesn’t intend to run there?

The Keserwani posters seem to have a deeper rumor around them. Let’s call it schmoozing galore. According to this article (link), the posters are the attempt of a Keserwani MP to kiss up to the FPM’s leader in order not to kick him off his prospective list in the region. And you thought our politicians couldn’t be that desperate?

Batroun, however, wouldn’t accept this Keserwani schmoozing, regardless of who did it or why it was being done in the first place. So à la “bring it, b*tch,” we started our own gebranophile campaign across our highway.

Batroun is proud of its son’s energy:

Whenever you land, your ministries become essential:

We’ve lived and seen the dams in Batroun:

If only billboards translated to ministerial actions or governmental projects, we’d be one first-world country by now. If political marketing blitz translated into votes, Gebran Bassil would have been in parliament now.

But as it goes in this country, the supplies of any kiss-up material, especially leading up to elections, begin to run dangerously low due to the huge demand. Who’s willing to bet that a counter campaign will be run to discredit any possible accomplishments advocated by this campaign? You know it will only be a matter of time.

So where will Gebran Bassil run? I guess the answer is quite simple: who cares about Batroun when Keserwan, the self-proclaimed heart of Lebanon’s Maronitestan, is vying for you?

As for me, I’m enjoying the billboard cat-fight. Sorry Keserwan, I’m going to side with my home-turf on this. I’m biased like that. Batroun FTW.

Gebran, why don’t you stay?