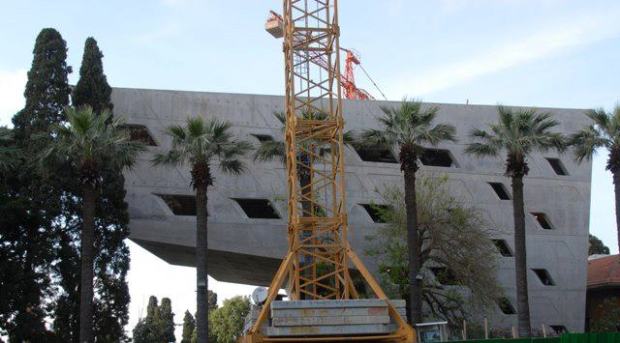 Towards the end of my AUB days, someone decided to close down the area that held an infirmary in order for some new construction to take place.

I am not unfamiliar with construction projects at AUB which filled my time when I was there: both the Olayan School of Business and the Hostler student center opened when I was a student. I’m no expert nor do I know anything about architecture but they never struck me as disembodied elements of AUB’s campus.

The building depicted in the above picture is what’s standing in place of the infirmary today. Is it hideous? You bet. Is it an atrocity? Definitely. Does it take away from the charm of AUB’s upper campus? Well, it is a concrete block with holes in it. Again, unprofessional opinion here.

Why is such an ugly building overshadowing Nicely Hall? Because it has Zaha Hadid affixed to it, the world’s most famous architect, who “won” the competition to build this. As if the pull of her name alone isn’t enough to sway the competition.

I have to ask – and it’s obviously too late now for such a question – but didn’t anyone from AUB’s administration get a tinge of nausea as they passed by this growing structure and saw it disfiguring the campus many of them call home? And isn’t the mere presence of such a building disrespectful to the architecture faculty at AUB which is more than capable of coming up with better and more campus-relevant buildings?

But I guess this is how things roll around the country: go with the flashiest, most expensive, most prominent names because that’s sure to be better. Issam Fares- no relation-, after whom this building is named, should probably sue them for libel.