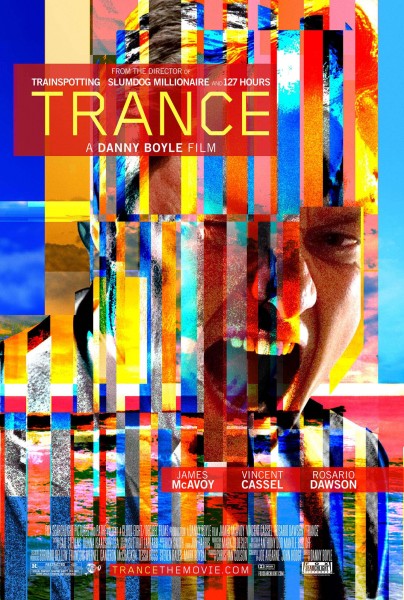 Trance is a movie fitting to take me back to movie reviews. I don’t hide being a fan of the movie’s director Danny Boyle. His previous offering: 127 Hours (review) was, in my opinion, the best movie of its year – one that included Inception. The movie that made him a household name, Slumdog Millionaire, was excellent as well. Who could forget Latika?

Trance continues in that vein, albeit it being potentially much less award-friendly than the other two. After all, this movie wants to be a blockbuster. It’s the story of Simon (James McAvoy), a worker at a London auction house who gets caught up in a heist of a Goya painting, suffering a blow to the head in the process making him forget where he placed the painting in question. To help him remember, the group of thieves, headed by Frank (Vincent Cassel) enlist the help of a hypnotist called Elizabeth (Rosario Dawson) whose skills will be utilized to form a true mind twister of a movie.

For some, the plot that makes up Trance will be considered too complicated. Others might consider it a shallow attempt at a true thriller in the vein of Inception. I found Trance to be transfixing and couldn’t help not be taken into its world. It had been a while that a movie managed to captivate me the way Trance did. Be it Danny Boyle’s excellent camera work on the movie’s intricate scenes, to the twisted build-up that gives you bits and pieces of the story without them being necessarily in the order you prefer, to the pounding music score that goes well with how well Boyle edited his scenes.

In fact, you cannot not appreciate the intricate work that Danny Boyle does on Trance, regardless of what your opinion of the story might be. Those who think the story is too complicated will be thoroughly entertained by how fast-paced the movie is. Those annoyed by the plot will find the directing style lavish. Those, like yours truly, who were enthralled will find it to be the cherry on top of the cake – or it could be the cake itself.

James McAvoy is haunting as the man trying to pay off gambling debts by agreeing to the robbery, perfectly accommodating the changes that the revelations regarding his character demand. He is electrifying with Rosario Dawson who excels as the hypnotist trying to find a place for herself amidst all the men making up the squad of thieves. The duo generates enough heat – both literally and figuratively – to help drive the movie forward.

The more attention you give Trance, the more focused you are on what the characters are doing on the screen in front of you, the more you’ll get to enjoy it. The final climax may be over-reaching and the movie may feel too stuffed and complicated at times. The psychiatric aspect has been, in typical Hollywood fashion, dramatized for the sake of shock. But this remains one of the best offerings 2013 has to give us so far. Trance is a movie you should watch. Nay, Trance is a movie you want to watch. Trust me on this.

This entry was posted in Movies and tagged Danny Boyle, Movie Review, Trance. Bookmark the permalink.