Perhaps this study published by the economist could be a wake up call to those who say there’s no need for regulations pertaining to the smoking situation in Lebanon.

We have the world’s second highest increase in smoking between 1990 and 2012. So while almost everywhere else was busy enforcing laws to improve the health of its people, especially when it comes to smoking rates, we’ve been sitting around doing nothing and watching. 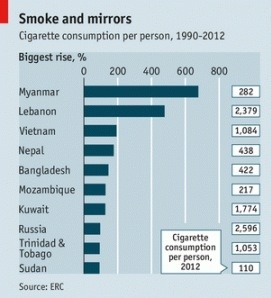 The healthcare situation in Lebanon is deplorable at best. We have no efficient primary health care in the country, a branch of medicine whose goal includes the prevention of such drastic increases.
The only form of law we have pertaining to smoking is the smoking ban which almost no one is abiding with these days, not that our security officers care. After all, there are worse things happening in the country, or so the argument goes.

Cigarette prices are still a dismal maximum of $2 per pack because God forbid we tax it and the mentality towards smoking hasn’t changed despite the timid efforts to tackle it.
As an example, I was asked by a patient while rotating at a Lebanese hospital, an IV in her arm with a hospital gown and all, if she can smoke indoors. I guess she wasn’t too pleased ordered her outside.

What hope for improvement can we have when there are physicians with absolutely no problem in chain-smoking while wearing the same white coat they will use to see patients a few minutes later?
What improvement can we seek when medical students, the people who should be advocating for this, smoke more than your average Lebanese despite every single medical literature telling them smoking isn’t good for them – beyond the typical picture of a smoker’s lung?

There are way too many interventions that this country needs. It’s time smoking goes up on the list of priorities as we slowly let the people of our country kill themselves and the people around them away.

But I guess who cares with the political deadlock we have, the elections we won’t be having and the parliament we will be having around for a year or so more.

This entry was posted in Lebanon and tagged Lebanon, smoking. Bookmark the permalink.

One thought on “Smoking in Lebanon: World’s 2nd Highest Increase in Smoking Since 1990”