Some local band had their song picked up by Lebanon’s “security” agencies and were investigated regarding its supposedly president-insuling content. Everyone got up in a fit. The law being employed to justify the arrest was an ancient one that forbids Lebanese citizens from insulting the president.

A few hours later, it was our president Michel Sleiman himself who ordered the band be released when he found out they were arrested due to insulting him.

A local activist named Jean Assy, who also happens to be a staunch FPM supporter, is arrested for insulting the president. All hell broke loose on social media. The constitution’s preamble that guaranteers freedom of speech has been quoted so many times that I can almost recite it at this point had I been paying closer attention. Jean Assy will soon be released because these charges never, ever stick. And he will become a local hero for many who are beginning to idolize him.

I do not follow Jean Assy on Twitter because I mostly disagree with content and find the tone unacceptable. But I occasionally get his tweets retweeted onto my timeline. Is this matter only because he “criticized” the president? I remember seeing many tweets in which the words “president” and “castrated” [in that order] were mentioned. Is that freedom of opinion or is it libel? 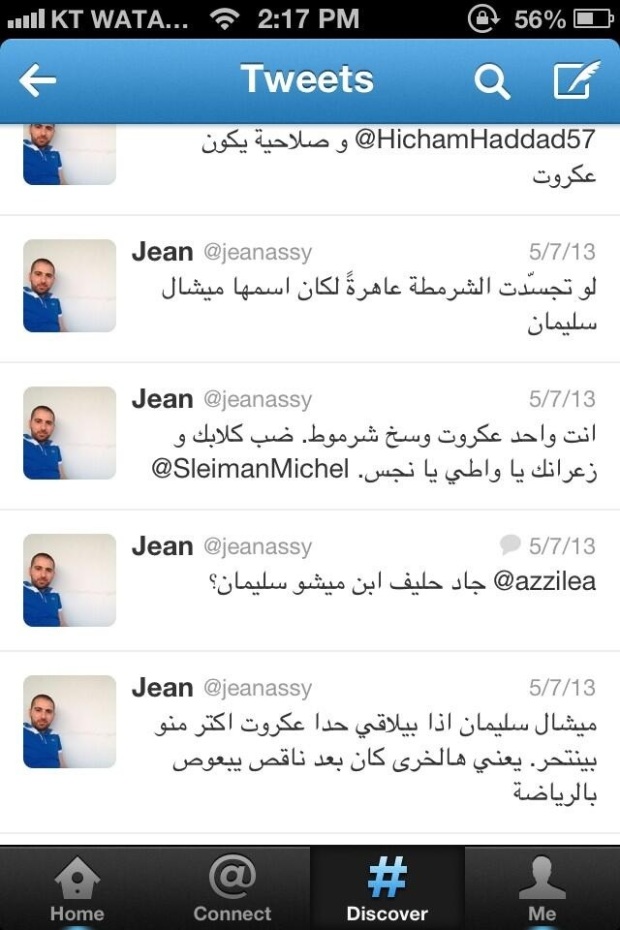 Is the arrest of Jean Assy warranted? Possibly not. In an ideal situation, I can call my president anything and expect to get away unscathed. But this isn’t an ideal country. In fact, I can barely think of a few things that make standards of life here remotely acceptable. You only need to check the news – word of advice: do not – to know how deep in this hellhole we are. What Jean Assy’s arrest for investigation, however, is not a matter of political rhetorical martyrdom and the Lebanese president turning into a dictator when, for all matters and purposes, the Lebanese president may be perfectly unaware of this even happening and the whole arrest is carried out by some security men with a vendetta under the pretext of a law that needs to be changed and removed.

The other element of the Jean Assy arrest is some prominent FPM politicians running to his rescue with tweets and retweets of their own. I have to ask those politicians: where were you when Hachem Salman was killed at the front doors of the Iranian Embassy? Where are you now that Ramy and Marwa Olleik are forbidden from going back to their hometown due to their threats on their lives? Or are my liberties as a Lebanese contingent upon the political rhetoric they can spark?

It is a sad day when opinionated people get arrested due to silly outdated laws, regardless of how over-the-line those people may have gone. But look at the silver lining: at least Jean Assy has people to watch his back. Many other Lebanese do not.

This entry was posted in Lebanon and tagged Arrest, Freedom of speech, Jean Assy, Lebanon, Michel Sleiman. Bookmark the permalink.

4 thoughts on “The Lebanese President & The Arrest of Jean Assy”