In order to identify the major trends of this continuing deterioration, the study in question (link) evaluated ten aspects regarding internet freedom in each of the countries studied. These ten aspects were:

As such, the following major trends emerged:

Lebanon’s score is 45, which means we’re only partially free. We don’t even come first regionally. The countries we trail are Morocco and Tunisia. We are also tied with Libya as this graph shows: 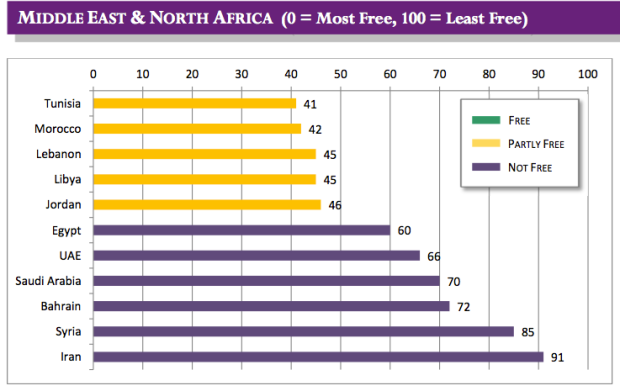 Lebanon’s grade was split in the following manner:

The facets in which Lebanon lacked were the following:

I daresay our ranking is pretty much expected. Some social media users were arrested for badmouthing the president, regardless of whether such an arrest was warranted or not. Some bloggers were called in for questioning over blogposts in which they criticized a shabby award show. Other bloggers were sued by TV hosts for libel while those TV hosts did nothing but commit libel left and right all the time. In fact, if a survey is to be held amongst Lebanese bloggers and social media users, their personal security would rank as their main concern. Such a security is not only physical, but it’s also legal: we simply don’t have the means to defend ourselves against those in power who don’t revert to laws, which aren’t even put to effect. Is it truly freedom when you feel that you have to rephrase what you have to say every time in a way to avoid ruffling the feathers of those who can make your life a living hell through their limited mindedness?

The country is also experiencing a drastically increasing censorship. It was only a couple of days ago that our General Security stopped two movies from airing at Beirut’s Film Festival (link). While such censorship isn’t assessed in this study, as it currently stands the study lists Lebanon’s limit of content as minimal at best. But judging by how things are currently heading, this is definitely heading to increase soon.

Lebanon is currently experiencing an increase in the rate of penetration of internet services among its population, so we have a choice in front of us. We can either become like Saudi Arabia, UAE and Bahrain: technically proficient but extremely restricted. Or we can aim to become like the world’s countries which have advanced technologies and liberties to boot. I really hope we choose the latter but I’m not getting my hopes up.

This entry was posted in Lebanon and tagged Internet Freedom, Lebanon, technology. Bookmark the permalink.