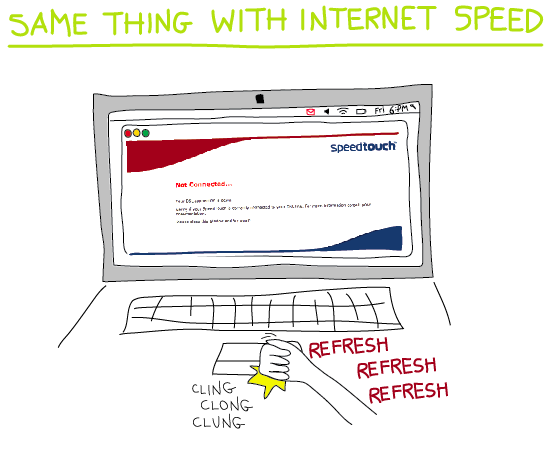 Isn’t this the best news to wake up to?

According to Al Akhbar, Lebanon has failed to pay its dues to the IMEWE internet cable consortium and will be cut off from the country’s main internet supply tomorrow, effectively slashing 60% of our internet capacity. We owe the consortium around $1.9 million. If that amount is not paid by November 3rd, tomorrow, Lebanon will also lose its share of the IMEWE cable which is worth around $60 million.

Given our internet state, slashing 60% off of it means we are rendered with a connection that is barely usable and certainly not enough to sustain the country. Lebanon also has a redundant system which covers 30% of current capacity. Back in July 2012, Lebanon had an outage in the IMEWE cable which was due to technical reasons. We fell back on that failover system and the only functional internet we were able to access was that on our mobile phones.

Who’s to blame for this? Everyone I guess. The Ministry of Telecom is the one in charge of the dealings with the consortium as Ogero has been off the project since 2012. Ogero has notified the ministry back in May about the situation but the governmental situation, or lack thereof, prevented anyone from approaching the issue.

Isn’t it enough that we barely have usable internet in the first place that we now might have to deal with that internet becoming non-existent if not unavailable? Weren’t the many outages of IMEWE a wake-up call to have a decent enough backup system just in case? And why has this news taken so much time in actually becoming known, just one day before the deadline?

The joke currently goes: hit the beach tomorrow and try to get Wi-Fi from Cyprus. Or perhaps we should simply let Qatar handle this, as usual, and then rebrand our IMEWE share to “Shoukran Qatar?”

Update: According to MTV, the ministry has started the paperwork to pay the IMEWE consortium and keep our connection intact.

So a few questions:
1) Why wait till the absolute last minute and only because the news got this much traction?
2) Is $2 million such a huge amount that we had to reach this pathetic point?