I didn’t know “Noah” being screened in Lebanon was a matter of “if.” Everyone just assumed showing it might be a big deal given Egypt and Qatar banned it. But Lebanon following the footsteps of neighboring countries when it comes to censorship is a rare thing, and Noah found its loophole.

I watched the movie yesterday and I have to say, I wasn’t impressed at all. Not every movie needs to arise from a cinematic need to have it exist but I fail to see any point that Noah can put forth. Perhaps Aronofsky was fulfilling his childhood dream of bringing his favorite prophet to life.

I don’t even get why this movie has been labeled as offensive right out of the bat. If anything, Noah is only Biblical or Quranic because the main plot of the movie (a flood and an ark) as well as Noah himself are Bible and Quran entities. Apart from that, the movie holds next to no resemblance to any form of scripture.

In fact, Noah probably has as much in common with scripture as Harry Potter: they are, at the end of the day, only tales of good versus evil centered around a character with troubles. In Noah’s case, he is such a troubled man that his entire demeanor becomes grating, often pushing you away from any form of rapport that can be established with the characters on screen, all as he tries to appease his creator to the best of his capacities, even against common sense.

At the center of the Noah are gigantic rock transformers-ish creatures that used to be angels once upon a time, flowers that grow out of dead land, forests that sprout in minutes, a creation sequence that is beautifully portrayed, completely useless fighting scenes, a lot of CGI and a lot of drowning. It was somewhat like Lord of the Rings, except nowhere near as good.

Having watched it, I have to say this is yet another case of people rushing to see a movie only because of the controversy around it with the movie itself being quite subpar. Was it enjoyable? I have to say the two hours passed by well enough. But it was nowhere near as engrossing as I envisioned a biblical tale such as Noah would be. And that’s a shame. Out of 10, I’d give the movie 6.

However, before the movie began rolling, we were met with a screen that stayed there for 2 minutes, making sure everyone read what was on it. This was the loophole that got Noah screened in Lebanon: 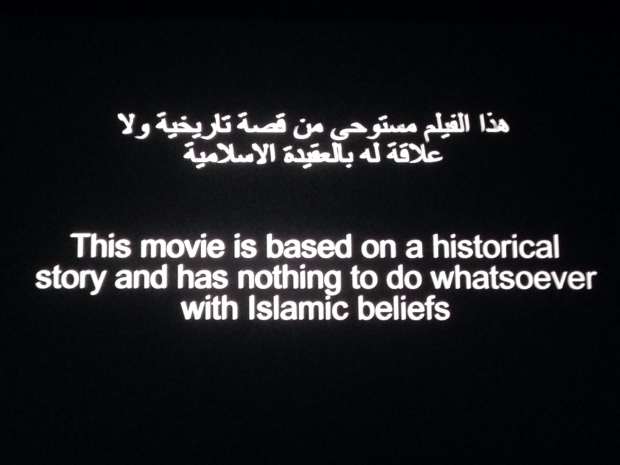 Hilarious? Sad? Horrible? I don’t even know in which category that prompt screen falls, but it’s the reason we’re getting to watch the movie. So either await a download or go to your nearest theatre to make sure that the science fiction movie you are about to see has factual contents and is religion-friendly.

This entry was posted in Entertainment, Lebanon, Movies. Bookmark the permalink.

2 thoughts on “This Is How Noah Got Released in Lebanon”