While everyone jumped from one pub to the next in Mar Mkhayel yesterday to catch the first game of the FIFA World Cup, there was a woman there standing in disbelief in the midst of her living room, looking over the streets filled with traffic. She was not looking out of a window.

The Facebook group advocating to Save Beirut’s Heritage (link) is trying to propagate the story of a woman who could have died because of the greed of contractors in Beirut who know there’s no law to hunt them, no regulations to constrict them and no one to tell them they did nothing wrong.

Right next to that woman’s house is a 1920s building which as of yesterday does not exist anymore. In the process of demolishing that building, her own apartment’s walls were destroyed in the process. If that woman had been there while those skilled workers were doing their “job” she would have been seriously injured, if not killed. The wall that was demolished is that of her living room. Her apartment is in a building that’s over 100 years old. The contractor has offered the woman to buy her another apartment instead, but what good would that do when it could have almost cost that woman her life?

Let’s not be gullible and assume it’s an innocent mistake. I don’t know the woman’s name. I don’t know who the contractor is. What I do know, however, is that the practice of damaging houses “accidentally” in order to force their tenants to evict has been going on for a long time in Beirut as the city’s manic rush to exemplify its concrete maze status is pushed full gear.

This isn’t about the value of an old house in Mar Mkhayel, although that’s another topic worth discussing in itself especially that the area is facing yet another round of demolition soon with the Fouad Boutros Highway tearing it apart. This is about the length that Beirut’s real estate mafia would go to in order to get that new “it” high-rise they’re craving for so much. This is about how little the lives and well-being of people mean in the grand picture of millions of dollars in investment being put to remodel the city and make it more chaotic, irregular and without a character than it already is.

A few blogs have already spoken about the issue (here and here), but I believe this is something vital to highlight so here I am trying to propagate it further. Beirut’s Municipality should care less about fencing Rawche at this point and care more about the well-being of the people in the city, the people who are dying because of their total disregard to the illegality taking place here. Lebanon’s ministry of interior should care less about people not having an easy path to World Cup watching and care more about making sure such a thing never happens again.

Yesterday, this woman returned to a damaged home. Some other day, many of us – living in old Beiruti apartments in areas bustling with construction – could suddenly face a reality without home.

These are a few pictures from Save Beirut Heritage: 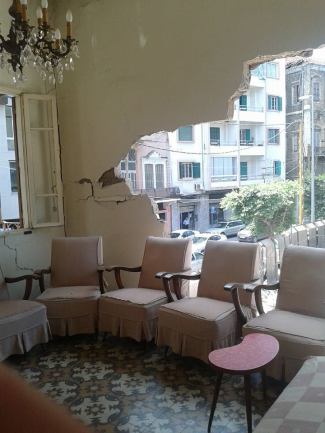 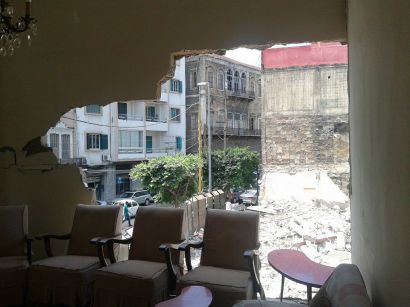 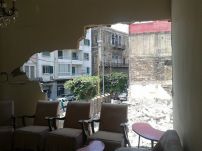 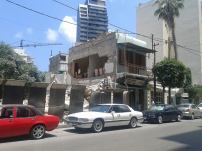