Remember that competition that found us voting our asses off for Jeita a couple of years ago? The one where we had pinned all our touristic dreams on? You know… *looks around to see if someone is looking and whispers* the one Jeita did not win?

Well, those running that competition figured it would be a good idea to keep the subcategories of new 7 wonders going. So for the past two years, another one has been taking place and, even though most of us hadn’t heard of it apparently, Beirut has found itself on the winning list of 7 cities that are now the new 7 wonders of the world when it comes to cities, whatever that means and whatever weight the list holds.

So to start this in perfect press release-like fashion, here it goes:

Beirut, our lovely capital, the city of endless youth, parties and life. The city that has risen from the ashes SEVEN times. Seven. It’s a sign for it to be a on a list of seven. See, it’s all as god intended. The city that was a pile of rubble in the not so distant past. The city of Gemmayze, Hamra, Monot and Dahyeh. The city of coexistence, of the Muslim chants merging with Church bells and of Churches being endlessly taken into that Mosque-containing picture frame. Yes, that city has won! 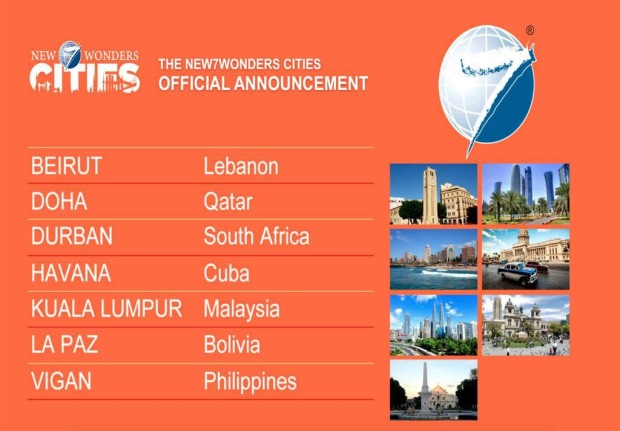 Arabs have won. Worry not about all the troubles ravaging the Middle East away. This tiny region of the world, where Allah saw fit to deposit all of his three religions, where imperialistic powers have looked for years at those lands in envy, were the Zionists will (eventually?) meet their demise. That region has produced not one, but TWO cities on that 7 cities list.

It’s a matter of regional pride. I demand a day, or several days off to rejoice.

I can smell it as I type this. Soon enough, the blog posts rejoicing about Beirut being on that list will start trickling down, like they always do when something Lebanese does something somewhere, regardless of how irrelevant that might be.

They will forget about all of that and inundate you with the wonderful news that your city – our city – is one of the most important places to be in the world right now (along with Doha, of course), and you will, in turn, forget about the lack of water, electricity, public transportation, president, parliament, elections, those kidnapped soldiers and Ali Al Bazzal as you drink to that wonderful news on your typical everyday night out at those many pubs springing around this wonderful city that serves alcohol in a region where alcohol is pretty much haram, enjoying that wonderous joie de vivre in this wonder of the world.

I cannot wait for all the excitement.

4 thoughts on “Beirut Is a New 7 Wonders Of The World Cities!”