Congrats Lebanon, we have made the international news cycle once more, the first time this year and hopefully the first of many.

No, it wasn’t about that viral Facebook fake-pictures-filled post proclaiming the beauty of God’s gift to Earth. I can hear your hearts break all the way here.

What made us international is actually old news to us. It’s so old in fact that not only does nobody care anymore, but the hype surrounding the issue has disappeared with each vanishing garbage bag stashed away in one of Lebanon’s valleys or on random roads, snaking around curves like white rancid rivers. Out of sight, out of mind – Lebanon style.

There is a bright side to the ordeal, however. Even our garbage bags look nice. They’re white, snow-like, built into winding rivers or towering pyramids.

Say thank you to CNN.

Wait for the upcoming onslaught from other outlets as well in the next few days. We are making it big. Aren’t we all proud?

Except, of course, this is *obviously* not the image of the country: 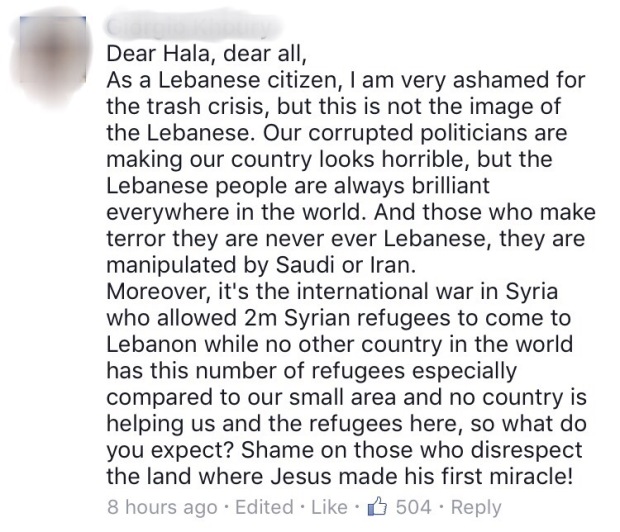 I mean it’s always someone else’s fault, never ours collectively.

Is anything happening regarding the garbage crisis? Not really. Our government is busy doing other things, or just one thing to be exact: kiss Saudi Arabia’s ass like no country has missed another country’s ass before.

This past week, our government convened for SEVEN straight hours to discuss one item on their agenda: how to formulate a paragraph to please Saudi Arabia in order not to face their wrath manifesting in them not giving us money anymore, beggars-style.

I don’t think our government has convened for a total of 7 hours discussing the garbage crisis, or any other Lebanese crisis for that matter, over the last several months.

No politician cared enough to act about the garbage crisis, or any other crisis, since it started. Have we ever had a “Loyalty to Lebanon” petition circle around the country before?

This past week, minister of Justice Ashraf Rifi quit to protest the Lebanese stance towards Saudi Arabia’s recent embassy attack, first and foremost, and to a lesser extent protest the handling of Michel Samaha’s case. It took their reference country being seemingly offended for some ministers to resign.
Months after the garbage piled up on our streets, months after protests of hundreds of thousands… No other minister resigned or was even fazed by the notion of needing to resign.
This past week, Lebanese politicians of all kinds of kinds had something to say about Saudi Arabia. Even those that opposed KSA politically were at loss about what to do.
This amount of political maneuvering has not occurred not only with the garbage crisis, but with out presidential vacuum issue as well.

There comes a point where an entire country begging for absolution from another entity for the sake of money, for the sake of empty Arabism, for the sake of useless politics when that country’s capital is drowning in trash becomes not only humiliating but also insulting.

This is where we are today: a country sinking in garbage, but whose priority is how low it can go to its knees. But please, by a all means, don’t call it brain dead.

6 thoughts on “When Lebanon’s Trash Becomes International, But We Are Too Busy Kissing Saudi Arabia’s Ass”