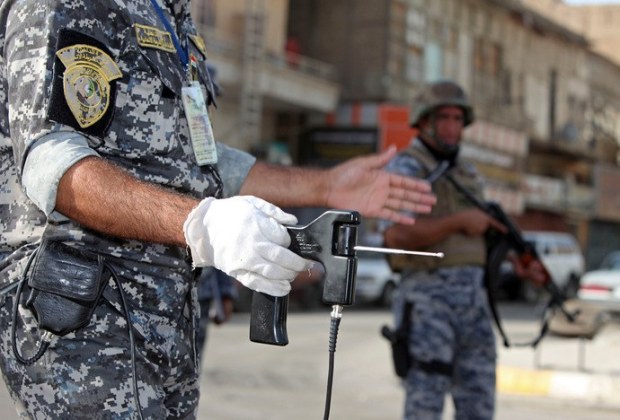 Security at Lebanese malls is like the ups and downs of alternative electrical currents. Whenever the situation in the country or around us becomes worse, if that’s even possible, you see them create all kinds of new methods to make sure your car doesn’t have explosives.

The common fixture, among all Lebanese malls, is those handheld detectors they keep on using. We’ve been saying for years that those detectors don’t work, and the horrifying tragedy of Iraq last year was proof enough: 280 people have lost their lives at a mall because those detectors didn’t capture an explosives-ridden vehicle.

And yet, Lebanese malls still use them like scripture.

The same detectors we are using have been the same ones failing to detect bombs all over Iraq for years. Vanity Fair reports that it was as early as 2009 when those pesky devices proved their uselessness as they failed to detect a van carrying 1800 kilograms of explosives, killing around 150 people next to a governmental building.

Those bomb detectors bought by Iraqi government, as well as security personnel from a dozen government around the world, were devised by American and British con-artists who made millions off of their sales. The gadgets started off as a game, and have been modified to look more security-appropriate, and given fancy names.

And yet, they still never worked. The device remained absurd and useless. Yet, it was bought like candy.

The list of apparatuses that bought the device include:

The device was tested by the F.B.I, as well as British intelligence. Both declared it a fraud, and governments still bought it. The person that made them was convicted for fraud and sentenced to 10 years in prison. And yet, the devices he sold have proven to be extremely difficult to remove out of the market.

Was it piece of mind they gave? Perhaps people felt at ease thinking that their cars being “scanned” by an antenna that moved by gravity?

Despite of the mounting evidence against them, including an attack in Karachi just last year, those same devices, which have failed to save thousands of lives they pretend they should have saved, are still used en masse at Lebanese malls.

You go to ABC, and you go through a metal detector before you are met with that antenna. You go to LeMall, and it’s the same thing all over again. City Centre, CityMall, the list goes on.

I’ve also gotten the same security measures when I visited Amman around 8 months ago. It’s probably a Middle Eastern thing.

You go to those malls believing their measures will keep you as safe as you can be in a place as crowded, in a country as teetering on the age of a Middle Eastern political volcano. Few of us think we are endangering our lives by counting on those devices, and yet here we are.

Today, two hundred and eighty people in Iraq were in our shoes last week. They didn’t think going to a mall to buy gifts and clothes for Eid would get them killed, that it would be the last thing they did especially that they got searched, and their cars scanned, and everything that should have prevented that bomb from killing them actually took place.

So where do we go now? Public awareness is key. Those detectors are not protecting you. They are not detecting cars with explosives entering those malls you are visiting. The only thing they’re doing is take up your time for utterly useless reasons.

Lebanese malls, it’s time to invest in measures that actually work if you actually care about protecting your customers. Get on it.