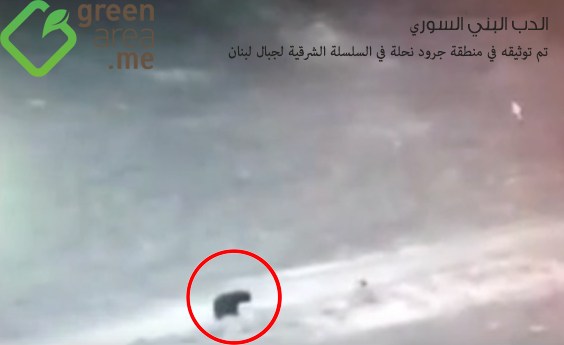 To break away from the string of saddening and corrupt news emanating from this country since the start of the new year, it brings me so much joy to write about this.

Towards the end of December, a group of youngsters scouting the hills of the Anti-Lebanon mountain range in the Bekaa, about 6 kilometers Northeast of Baalbak, spotted two animals that have not been seen in Lebanon for around 60 years: since 1958, to be precise.

The Syrian Bear, whose latin name is Ursus arctos syriacus, was originally found in Lebanon towards the end of the 19th century but was haunted almost to extinction so that, since 1960, the only pair present in the country are at a reserve in the Chouf.

The video, which was posted by GreenArea and later on picked up by multiple news outlets and blogs, shows the mother bear and her cub circling around the snow, probably in search for a safer or warmer area.

The presence of the cub with his mother means that the pair’s habitat is probably nearby as the cub couldn’t be more than a year old, which is how long mothers tend to take care for their offspring in that species. Its estimate birth is around spring of 2016 or slightly earlier.

This sighting is historic because the closest area these bears were spotted previously was around 500km away, in Turkey, even though they used to inhabit the areas of Mount Lebanon quite frequently around 100 years ago.

To say that these bears MUST BE PROTECTED (all caps, shouting from the rooftops) is of utmost importance. Not only are they on the endangered animals list with the threat of going extinct worldwide, but up to this point we had lost them from Lebanon.

It’s the responsibility of our Ministry of Environment, as well as ours, to make sure that locals of the area do not decide to flex their hunting muscles and go seek out the bears to add them to a list of animal trophies, and to designate the area they’ve taken up habitat as protected.

This further shows that mother nature has its own way to establish normality when humans don’t come interfering in it.

One thought on “Syrian Brown Bears, Thought To Have Been Extinct From Lebanon For 60 Years, Seen In The Beqaa”