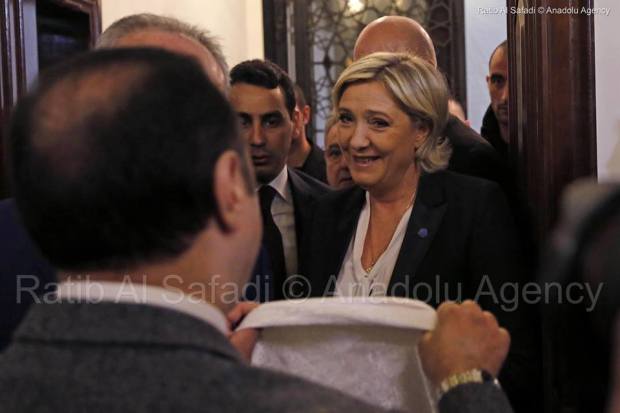 It was almost going to pass without the media splash that Marine Le Pen wanted her Lebanese visit to generate, but she finally got her wish towards the end of her visit to the only country so far whose officials have agreed to receive the far-right presidential candidate.

From her first-ever handshake with a head of state, to the visit making fake news website Breitbart headlines with it being to see Lebanon’s persecuted Christians, the biggest splash is how Marine Le Pen refused to wear a headscarf to meet Lebanon’s Sunni Grand Mufti Abdel-Latif Daryan.

It was only a matter of time that the Vice President of Le Pen’s party tweeted the following: 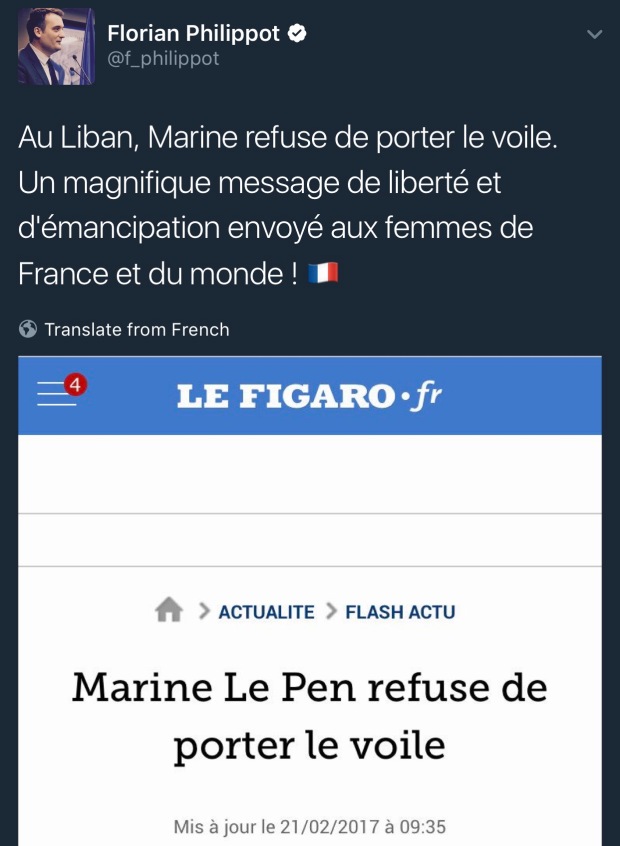 Of course, this whole affair is anything but a “wonderful message of liberty emancipation sent to the women of France and the world.”

As she arrived to meet the Mufti, Marine Le Pen was faced by a man – as pictured above – holding out a veil for her to cover her head. She feigned surprise before refusing to wear it with the argument being that she had met the Mufti of Al-Azhar previously and didn’t face such requirements, in reference to a 2015 visit.

Her argument, however, is worthless. Marine Le Pen was informed yesterday that the Mufti would only meet her if she covered her head with a scarf, but she still showed up anyway with the only purpose to be as controversial as she possible.

It was nothing but a publicity stunt, and it worked. These are the current top news google results about Marine Le Pen: 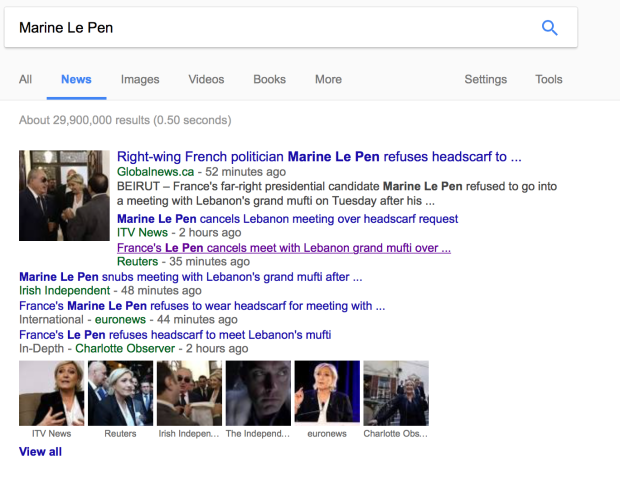 People like Marine Le Pen and Donald Trump know that the best way to get attention is to be as controversial, loud, and offensive as possible. In a world of post truth and alternative facts, that is the only thing that gets attention and gives them the spotlight they so desperately seek.

By orchestrating a charade of refusing to wear a headscarf even though she had known the day prior that she’d be required to do so, Marine Le Pen acquired the brightest spotlight of her Lebanese trip: one in which those that support her will think – as her VP said – that she’s standing up for women rights, except she’s not.

This is not about the validity of the request to wear the headscarf, per se, as that is another topic and a whole other discussion. I’m personally against forcing anyone to do something against their will, be it Le Pen or headscarf or otherwise. But I also believe that is my duty as a person to be mindful of the situation I am willingly putting myself in. If that situation – in this case being asked to put a scarf on – isn’t something I’d be comfortable in, then I simply would opt out of it.

Women in Lebanon don’t need Marine Le Pen to stand up for them, especially when the only facet of Lebanese women she cares about are those who wear a Cross around their neck or who roll their R’s as she does. Simply put, Lebanese women are not required to cover up. They are not coerced to wear the veil to walk on our streets. They can wear whatever they want as long as they’re comfortable wearing it. They are the most liberated of women in the region. Anything other than this is misinformation.

That is not to say that Lebanese women have equal rights with their male counterpart. The struggle is continuous. They are fighting for their rights as diligently as possible. It was only a few days ago that they scored a major victory with having a penal code law that’s detrimental to their well-being be completely scraped off. That occurred without Le Pen’s help. Lebanese women don’t need a woman who fosters the kind of hateful, divisive, phobia-centric rhetoric that Le Pen spews, and they sure as hell are not represented by having such a farce as this be painted as “fighting” for them.

It is unfortunate that Lebanon’s mufti played right into Le Pen’s hand. If I were him, I would’ve simply not put that requirement in place in order to meet someone who’s as notoriously anti-Muslim as she is, or I would’ve refused to meet her in the first place. He wouldn’t be the first religious or political figure to shut her out, and the message sent through such a refusal or through refusing her the controversy she so desperately sought out would’ve been much better.

Regardless, if Marine Le Pen wants the presidency she’s seeking with desperation, she should learn to respect the various cultures of a world in which she’ll possibly be heading one of the top states, some of which require her to let go of her hate and phobias in order to have a conversation. But she is who she is. I bet she’s the kind of people who refuse to take off their shoes before entering a mosque, or who refuse to wear a yarmulke before entering a synagogue.

If Le Pen wanted to meet the Pope she’d be asked to wear black clothes and a matching mantilla, or a lace veil worn over the head. I bet she won’t have an issue with that. Respecting differing cultures is key, and with people like her that will never happen. Until then, I hope people can see through the bullshit.

13 thoughts on “Marine Le Pen Refusing To Wear A Headscarf To Meet Lebanon’s Mufti Is A Publicity Stunt, Not Standing Up For Women”