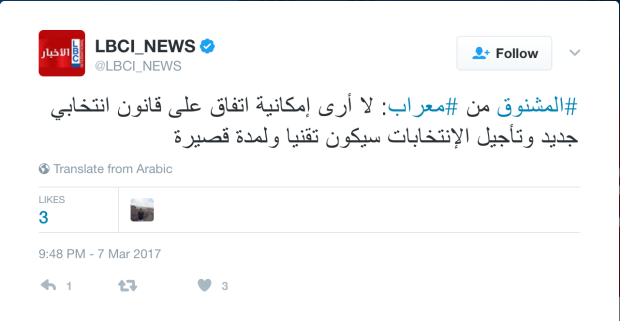 They want you to be busy with Myriam Klink, while they ignore the fact they should have come up with an election law 8 years ago.

They want you to be busy with their attempts to make you poorer, while they ignore the fact that they are demolishing the deadlines for the parliamentary election coming up this May.

They want you to be overwhelmed with all the hurdles they throw at you, so you are too preoccupied from standing up to the neo-dictatorship they’ve turned this country into by being so incompetent, so horribly bad, and so disgustingly unfit to serve you as citizens.

They want to blind you with them ordering delivery from apps, and bicycle lanes to feign modernity.

They want to fool you with biometric passports thinking we’re going up.

They want you to be grateful they’ve maintained stability, grateful that you have them, as they take us as citizens for granted every single day.

So here’s our wake up call:

We have not voted for parliament since 2009.

The last time Lebanon went this long without elections was when we had a civil war. This time, there’s no war. There’s simply horrendous incompetence and corruption and utter disregard for the constitution and our rights.

People of my generation have never ever cast a vote for parliament. I can’t even hold my politicians accountable because they don’t let me under the guise of “fair representation.” Here’s a news alert for you, our disgusting politicians: representation will never be fair if, you know, elections are never held in the first place.

And parliament will extend its mandate for the third time in a row, because they can’t agree on an electoral law, because they don’t care about agreeing on a law in the first place, because us having the basic right to vote is the least of their concern.

But please, Lebanon, if they ever let you vote, just don’t vote for them?