Following the outrage of some Lebanese that other Lebanese were outraged at a possible shirtgate involving demonizing a Virgin Mary icon are not aware of well-rooted Mexican folklore, the Mexican embassy, in collaboration with the Lebanese government, will be building a Santa Muerte shrine in the village of DeirBella.

Issuing a brief statement on the matter, the Mexican embassy noted the “overwhelming support” their not-recognized saint has gotten over the past few hours in Lebanon. They were “absolutely dumbfounded” by the well-rooted knowledge of Santa Muerte among the Lebanese populace whereby everyone seems to be quite the expert. “We didn’t know Santa Muerte had so many fans in Lebanon,” they said, “this makes us quite excited about possible culture fusion between the countries.” The embassy was also quite “enthusiastic” about the culture fusion prospect in Lebanese society, à la St. Patrick’s Day and Thanksgiving.

“It shouldn’t be exclusive to the Irish and the Americans, now should it?” They said.

A date to celebrate the Day of the Dead is still being debated. They’re not sure if it fits with all the Halloween parties that will take place on October 31st.

The Lebanese government, on the other hand, sees this step as another confirmation of the deep ties between Lebanon and Mexico where a sizable expat population could be found. They find the building of the Santa Muerte shrine will strengthen the relation between the two countries, giving both expats and Lebanese residents a taste of Mexican lore. The government noted the choice of location as somewhere that has a Spanish flare in its name so Santa Muerte feels right at home.

I remember when Pope Francis was elected, last month
We said this is it, now’s our shot
Cause like he wasn’t wearing a fancy robe
When he waved his one Argentinian hand
Then he came around again and said
Minions, Santa Muerte will not be recognized ever
And all of you have to deal with it
God Bless those who don’t know it exists.

We are not entirely sure about the hit potential of the above song but rumor has it Najwa Karam was enlisted to write the accomagnying Arabic version. Her latest tweets have all been of the anthem’s possible lyrics: “Albi fata7, seret shouf, Santa Muerte ejet.”

Meanwhile, research is underway at the American University of Beirut between psychologist Thomas Renecamp and philosopher Patrick Henderson. This rare collaboration between these often-diverging sciences is centered around the peculiar reaction that was observed following ShirtGate whereby Lebanese people established a duality of freedom of expression. They are trying to understand the dynamics behind calling other people ignorant and condescending because of a simple disagreement of opinion. “Freedom of expression seems to go only one way only in Lebanon,” Henderson said. “If your opinion isn’t that of the cool people, then your opinion is automatically relegated to something subpar compared to the other self-proclaimed wise men and women.”

They are also working on a hierarchy of ignorance whereby different levels of the entity will be categorized as they have found the term to be thrown around very loosely.
“Not sure if an English word or a prostitute,” professor Renecamp was heard saying in typical German candidness.

If you feel like participating in their research, you can email TR8656@aub.edu.lb and PH7.13@aub.edu.lb.

The Maronite and Catholic Churches in Lebanon have yet to take any measures due to the Patriarch being on a European road trip for the next month and a half.
The shrine in question is set to open on April 31st, 2013.

You know all those memes and jokes about your crush not knowing you exist? Well, some Lebanese students decided to put an end to it all by creating a sort of gossip hub where they gather people’s infatuations and broadcast them anonymously for their entire campus to see.

This “gossip hub” has taken the form of several Facebook pages for most of Lebanon’s major universities: USJ, NDU, LAU and AUB. Despite launching only yesterday, the USJ page has so far near 1000 likes. The other universities haven’t caught on the crushes fever yet.

I find the idea to be smart: it gives those who have a crush on other people the courage that comes with anonymity to declare their feelings. It serves as an interesting addition to campus life that Lebanese universities have yet to see and, most importantly I guess, it just sounds like so much fun: the interaction that I saw on the corresponding Facebook pages because of it is proof enough for that.

The process is simple. You submit info about your crush anonymously to the page: they don’t know who you are and you can even make any info about your crush as ambiguous as possible. In turn, the page admins post the info on the Facebook page. People are guessing almost immediately who the person is and tagging them. The tricky part is for that person to know who got that post to be published on Facebook in the first place. 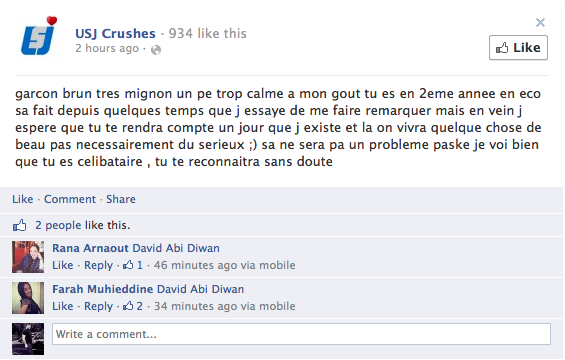 Some students have a crush on their professors:

I commend the students behind these pages for the very clever idea. Don’t be surprised if you get contacted by several high profile entities regarding your pages quite soon. It’ll only be a matter of time.

Some more examples from the USJ page, which is by far the most interesting:

As for everyone else, if you feel like you absolutely must tell your crush that you are crushing on them – anonymously of course – here are the necessary links for you:

Hopefully students finding each other will lead to some form of much needed release in this country. I’m tired of recommending tranquilizing pills to the huge amount of people always on edge I’m encountering lately.

Update: Was just informed that, as I suspected, the idea is taken from universities abroad where the Facebook page in question has the format: Spotted: [X] University.

Update 2: University of Balamand (UOB) and USEK have their own pages now:

Well, not quite. The above tweets are not real. But they could have been. Am I right?

Anyway, this blog is nominated for “Blog of the Year” and “Best News Blog” – I know, I know – at Beirut’s Social Media Awards. I’d appreciate your support.

This is how your screen turns once you’re successful:

Our country is unique. If you thought our attempt at breaking into the seven wonders of nature with Jeita Grotto was a bust, think again because Lebanon has established an eighth wonder. And get this – it’s both natural and the work of men.

How’s that? Well, you don’t need me to explain the birds and the bees for you (I hope) but we can all agree that it is a natural process. And what those birds and bees eventually lead to is the work of men and women obviously.

What’s Lebanon’s eighth wonder? The correct question is not what but who. Behold, ladies and gentlemen, Nabih Berri:

“How do we not love him and the eighth wonder of the world is his laugh,” the poster’s caption said.

In all his twenty years as speaker of parliament, I have never seen Nabih Berri smile. But I’ll take their word for it.

The Pyramids of Egypt are beyond jealous. Just saying.

Thank you Mr. Sakalaki for the picture.

Update: Another picture courtesy of my friend Mr. Seif. Berri’s supporters are the gift that keeps giving – with feisty slogans to boot. 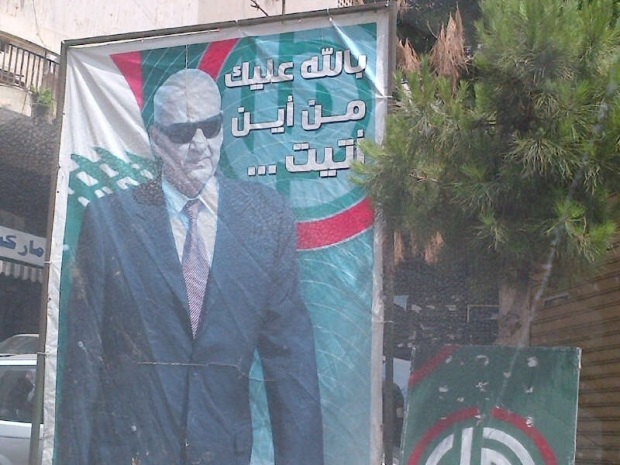 The ministry of internal affairs has started its preparatory campaign for the 2013 elections by telling people to check their name on the voters lists before March 10th, which I told you to do a few days ago (link).

As part of its attempt at getting the Lebanese voter to feel more involved, especially that it pertains to bureaucratic stuff most people don’t want to feel concerned with, they have launched the following funny ad, which plays on the different types of Lebanese people who might be “violated” by errors on the lists:

The last 2 seconds of the ad are beyond hilarious, which is probably what might get some people to go to this website (link) and check if their name is correctly listed.

And if you thought the Roum Catholic part is far-fetched, just check out this screenshot (link) from the lists of my hometown.

PS: They are brothers.