It’s a joyful moment for many when they get that American embassy employee to smile at them and tell them their visa request has been finally approved. I wouldn’t know since I’ve never had that happen to me.

For many, it is believed the struggle to get into the United States is almost done – what can go wrong now that you’ve got the paper work? Nothing, right?

For 3000 Lebanese, visiting the United States has become an impossibility for reasons no one knows. The people whose visas got cancelled belong to different Lebanese sects and religions: Christian, Muslim, Sunni, Shiites. They belong to different societal strata: businessmen and regular joes.

The U.S. Embassy in Lebanon has denied such numbers  (link), asserting that it is within the authority of the American State Department to cancel visas if information came to light after their issuance that would make the person in question inadmissible in the United States. But isn’t it also the right of Lebanese citizens, whoever they are, to know what those information are?

The most prominent example of canceled visas is the Hallab family in Tripoli, which has affected all four owners of  Hallab. For those who don’t know, the Hallab family owns and runs Asr el Helo (The Palace of Sweets). Some were forbidden from going for their medical checkups while others were told, upon leaving the United States on their way to Lebanon, that this would be their last visit. Even calls for Lebanese officials who, until very recently, used to be fully acting prime ministers to help with this issue proved to be completely useless.

Furthermore, it has been brought to my attention that Hallab, the sweets shop, is currently cautious about exporting its goods to the United States. The family is currently in a legal debacle in order to try and see how the visa cancellations affect the export.

But is there even any logical why the Hallab family’s visas are canceled? I can think of none. They do not harbor nor support terrorism and Islamist movements. They do not fund radicals who might find their way to American soil.  And yet here we are.

Another businessman whose visa got cancelled is Khaled Rifai who owns the Tripoli branches of GS, Springfield, Polaris and Bossini  as well as an insurance company. Khaled Rifai and the three Hallab brothers, who are a mere fraction out of many that includes Lebanese students, were not given any reason as to why their visas got cancelled. Better yet, their cancellation got almost no media coverage in Lebanon to begin with. I guess the media blackout over Tripoli extends to such incidents as well.

Who do we blame for this? I guess we can blame the politicians who have willingly turned the country into a playing field for everyone who wishes to start a game of tug of war. We can blame our useless passport, the most expensive and least efficient in the whole world. We can blame the current situation. We can blame whoever we want, point our fist at Awkar and pretend being outraged will get us somewhere.

But the truth is there’s absolutely nothing we can do but remain under the mercy of such embassies, vying for the next visa to take the bunch who doesn’t live in their version of Lebanese lala land out of here. I guess it comes with the territory of being where we are, what we are and who we are.

There’s nothing we can do but take it. 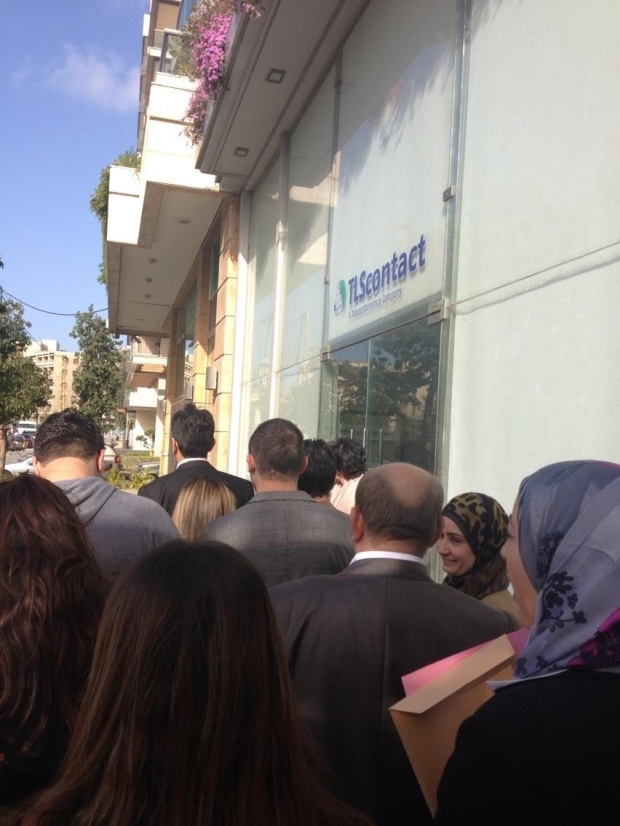 I submitted my papers to get the Schengen visa for a couple of weeks in June this morning. My appointment was at 8:30 so I went there early.
We stood in the cold, clinging tightly to a folder of documents that contained more papers than anyone would like to read.
We waited and waited until they were kind enough to let us in to wait some more before they called our names to have our pile of documents checked.

Why would anyone not invent an entire company just to apply for a visa?

You pay $115 and leave. You are asked to go to the embassy the following day to have your fingerprints taken. Because the ones they took less than a year prior are no longer valid. Fingerprints change yearly in case you didn’t know.

This is your healthy dose of reality: walking the walk that makes you feel worthless just to have embassies consider letting you in so you can spend your money in their territories for a couple of weeks of tourism.

Meanwhile, my dual citizenship friend has booked her ticket for the summer. She doesn’t have to bother with all of this.