I have not been following U.S. Politics closely lately, but I will become up to date with everything going on there as election time draws nearer.

I am also not a supporter of Mr. Obama. Those who know me should know that I would be considered a Republican in the U.S. Political spectrum.

However, the current wave of “criticism” against Barack Obama simply doesn’t make sense. Birthers, as they are called, are questioning the legitimacy of Obama’s birth on U.S. Soil, to the extent that he actually came forth with his birth certificate. 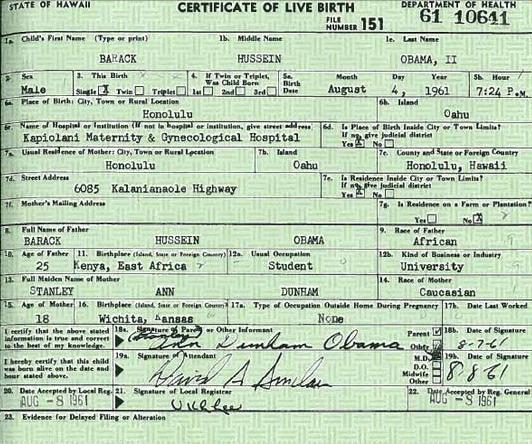 Not only is this a non-issue, with much more severe topics with which Obama can be confronted due to his less than stellar performance as president, but it’s also nonsensical.

A person cannot run for president of the United States unless he/she was born on U.S. soil – i.e: acquiring the U.S. citizenship later on in life does not entitle you to run. In other terms, I can never become president of the United States, but my cousins can. So do “birthers” really think that Obama wouldn’t have checked out as a legitimate candidate when he first ran that they’re questioning it now? You’d think the C.I.A or whichever front responsible for vetting candidates would make sure they are constitutional before letting them be elected.

U.S. Politics, with Obama being forced to show his birth certificate and his birth location becoming the issue of the moment, has sunk to a new low. And it doesn’t end here… Obama’s university grades are being questioned now as not as “high” as originally thought to be. When the world is busy trying to contain oil prices, handle revolutions and find peace solutions, Americans are being forced to deal with yet another issue that is far, far away from the issues that really count.