2014 has been a pretty messed up year on the Lebanese scale, but amidst all of it, there were a few Lebanese whose news served as a diversion from all the mayhem. Their accomplishments made us happy, even if they didn’t pertain to us directly. As we saw some of them make it big on an international level, we were maybe reminded of our own hidden potential over here. Others caused ripples right at home. To those Lebanese, I came up with this to salute them.

This 25 year old from Tripoli made it to MIT’s list of 35 innovators under 35. His innovation? A system that uses wifi signals in order to track people, their vital signs and other important components. The applications are limitless: from tracking elderly who are prone to falls, to new radiology methods in medicine to police application in criminal activity monitoring…. 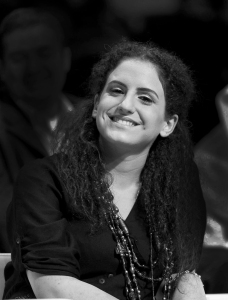 Hind was one of the most influential women of 2014 according to the BBC. She invented the Instabeat Goggles, a swimming monitor that tracks heart rate to offer real-time feedback. The device mounts on the straps of any swimming goggles, and reads the heart rate from the temporal artery.

This 11 year old from Tripoli won a competition in Germany earlier in the year that found him being named the world’s junior genius. He beat out participants from 40 other countries. He deserves more recognition than what he got, but the future looks bright for him either way. 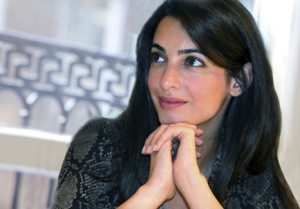 She was the most ubiquitous Lebanese around the globe this year. As far as the globe is concerned, it’s all because Amal now has Clooney as her last name. But Amal is one of the world’s most brilliant lawyers. Her list of client includes people like Julien Assange and former Ukrainian PM Yulia Tymoshenko. She has also lately been chosen to represent Armenia in the European Court of Human Rights. She has charmed people across the world, standing not only as equal to Clooney, but sometimes being the more interesting of the two.

She was also on MIT’s 35 innovators under 35 list. Her invention is LittleBits, a library of modular electronic units that can be connected to build many different things ranging from a sound machine, a night light, or even a lifelike robotic hand. She has sold hundreds of thousands of units so far in over 80 countries. And I bet she’s not stopping anytime soon.

He was named by MIT as one of the top 35 innovators under the age of 35 for his work in a company he founded called Snips, which analyzes data in hopes of making city living more efficient. To put that into effect, Snips partnered with the SNCF to create an app that predicts three days in advance how crowded trains would be on a certain day. In a world that’s increasingly built on algorithms, data, and numbers, analyzing such input is becoming not only essential, but vital.

It all started when Jackie’s photoshoot for a calendar surfaced through a video that showed her nude. The news passed under the radar, until Sports Minister Karami saw her behavior as “insulting.” All online hell broke loose. From “I’m Not Naked,” to “#StripForJackie,” the country saw a tangible liberal movement rooting itself in the collective mindset of everyone. Debates about women, feminism, body image and sex became the talk of the moment. Jackie didn’t end up winning an Olympic medal, but she became a household name almost overnight.

She first became known with Soapkills. Today, however, Yasmine Hamdan is on a whole other trajectory of success, having made it to Hollywood all by herself through her music. On “Only Lovers Left Alive,” she sings the song “Hal.” That song is on a shortlist to the Oscars this year.

They were the country’s first NGO to truly break into the mainstream when it the issue of corruption. For that, they devised an app that lets people pinpoint where they saw a corrupt act taking place and report it. They also set up base at various locations around the country to raise awareness. In a country where almost anything is at a price, shedding a light on this cancerous aspect of our society is very important.

This Lebanese composer was featured by the BBC as one of the 100 most influential women of 2014 for her music. Her compositions have been played by orchestras such as the London Symphony Orchestra, Royal Opera House, BBC Symphony Orchestra, Orchestre National de Lorraine, among many others. 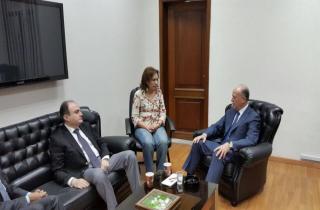 Most of you know her as the clerk that MP Nicolas Fattouch attacked for telling him to stand in line. Soon enough, she was spear-heading a campaign against Fattouch, who had managed to weasel his way out of every tough spot in his career. But not this time. The Beirut Law Syndicate decided to disbar him soon after he got caught up in another scandal. Daou filed a lawsuit against him. Who knows where all of this will lead, but at least she was able to do something. 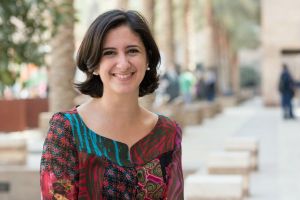 She’s an associate professor of practice of art at The American University in Cairo, and was featured by the BBC as one of the 100 most influential women in the world for the past year. Her influence comes from her tangible work in the Egyptian revolution(s), by orchestrating the most widely used graffiti consisting of the Arabic word “No.” She explains it all in her widely popular Ted Talk.

At a time when his predecessors did nothing of the sort, him doing his job becomes big news. His methods may be unorthodox – announcing restaurants in a weekly Star Academy-like nominee style is odd, and open to much criticism, but his work in the late months of 2014 on food safety in the country has shaken establishments.

When it comes to Lebanon, there’s a lot of crazy that keeps going around. There must be something in the water. Scratch that. There’s no water for anything to be in it. So I assume it must be in the air.

A quick round on today’s quirky news reveals MTV’s twitter account getting hacked by pro-hezbollah goons who wanted to teach the anti-hezbollah network a lesson in resistance morals. Another round of crazy in Lebanon comes in the form of what I wrote yesterday, about guards in my hometown assaulting Syrians left and right, just because. But of course, as it is natural around this country, there would be something to steal the spotlight.

I swear, some things you just can’t make up.

The story goes as follows:

MP Nicolas Fattouch, of Zahle, known to be the one our government paid about 240 million dollars as compensation for shutting down his illegal quarries, was heading to the justice palace in order to file paperwork, I’m assuming yet another lawsuit.

The clerk there, a woman named Manale Daou, respectful and helpful as she is kindly asked the parliament member to wait for his turn. As it stands, Mr. Fattouch wouldn’t have it. “I am Nicolas Fattouch,” he said to her, “a member of the Lebanese parliament. I can’t wait.”

I guess some people are above the rules. Honestly, at this point I don’t know why any of us are even feigning shock, except the story gets better.

“Of course sir,” Manale Daou replied, “but everyone has their turn.” So naturally, Nicolas Fattouch took out his hand and proceeded to punch Manale Daou in her throat. Because she told him to effectively take a number, like a regular Lebanese citizen, like you and I are supposed to do every single day.

The employees at the Justice Palace then intervened to get the MP off of Manale Daou’s neck. Fattouch’s bodyguards came to escort him out of the building, then LBC reported on it.

And that, ladies and gentlemen, is how I’m sure many MPs, represented by Mr. Fattouch, view you as a Lebanese citizen: irrelevant, worthless, a nuisance, a hurdle, a throat ready to be punched, a voice ready to be squashed.

Other MPs are doing the latter by extending their mandate for a reported two years, yet again. They’re also suing people who dare speak up against their practices, using your tax money to drag you through a Lebanese circle of legal hell. Fattoush did the former, and will walk away unscathed, untouched, and possibly congratulated by his bodyguard, his people over in Zahle for being the epitome of Lebanese “roujoule,” not standing down to that pest at the Justice Palace. Women should know their place. Lebanese people should know their places.

In an ideal world, Manale Daou would be able to sue Mr. Fattouch for assault. And she would win. And she would throw him in jail for a few months, topped off with a hefty fine, which is only fair given the amount he was given out of our tax money for his illegal business’s demise.

In an ideal world, other MPs would stand against their comrade and denounce his behavior. Instead of calling for their next session to be about yet another renewal of parliamentary mandate, they’d call for a session to effectively strip Mr. Fattouch off of his diplomatic immunity, making him as vulnerable to the very fragile Lebanese law as people who aren’t immune are.

In an ideal world, what MP Fattouch did is considered political suicide. It’s an Anthony Weiner-level scandal, or even worse. At least the latter kept it digital. Mr. Fattouch would then never see the inside of parliament ever again, except on one of those tours that happen every now and then to show Lebanese citizens how beautiful the empty hall of that useless building is.

Enough with utopian paragraphs, I suppose. In corrupt, maimed, fragmented, despicable and fragmented Lebanon, there are varying degrees of inequality. There are those who are irrelevant, who view rules as something to make everyone’s lives easier, who think there’s a beauty to order and weep at its nonexistence over here, among other things. And there are those who are above standing in line, above the law, above being called corrupt and above facing repercussions for assaulting a woman in broad daylight, at her workplace, in front of her coworkers and leaving the scene without batting an eyelid. In today’s Lebanon, the only discourse pertaining to Fattouch will go as follows: Wayn yo? Just going about my day, bro.

You are irrelevant. Bask in the hopelessness.

Update: Manale Daou has reportedly apologized to MP Fattoush and a judge has reconciled the two. What a shame.