Beirut Spring has just reported that a Now Lebanon article criticizing Saad Hariri and praising Najib Mikati has been pulled offline by the website. You can check out a screenshot of the article here.

If you’re interested in reading it, here’s a transcript (via Qifa Nabki):

The Baby and the Bathwater

If we are to believe a report in al-Joumhouria newspaper on Monday, French President François Hollande and Saudi Arabian King Abdullah, in a meeting also attended by former Lebanese PM and Future Movement leader Saad Hariri, will not back current Lebanese Prime Minister Najib Miqati if a new government is formed.

Do the Lebanese not have a say in any of this? We should worry at the carefree way in which Lebanon’s future is always being decided by outside actors, no matter who they are. The region is already polarized between the Sunni and Shiite communities in a dangerous standoff between Saudi Arabia and Iran. Such horse-trading will only serve to entrench further the sense that foreign powers control Lebanon’s destiny and that each side of the political divide is justified in having its regional backer.

Another worrying aspect was the presence of Hariri, a man who must surely concede that his role in Lebanese political life must now be confined to the margins of Sunni politics. He is living in LaLa Land if he still feels that the Lebanese public would welcome him back with open arms and see him as their salvation. In fact, it would be scandalous if he stood for parliament in the next general elections, let alone offer himself as a candidate for the premiership. (Ditto Nayla Tueni and the rest of the absentee MPs who, by their negligence, have done their best to snuff out the flame that was March 14 and insult the intelligence of the voters who sent them to Najmeh Square).

For it is not enough to simply oppose March 8’s fiendish agenda and make all the right noises about democracy, independence, sovereignty and the sanctity of the state. March 14 members must also take seriously their roles as public servants. The recent deterioration of infrastructure and the apparent collapse of law and order during August have woken up the public to the fact that if they want a functioning, safe, peaceful and prosperous country, and if they want laws enacted, it will not happen if the people they elect to achieve these ends are nowhere to be seen.

Which brings us back to the issue of Miqati and his suitability for the premiership. When he accepted to lead the Hezbollah-dominated government in the spring of 2011, many saw him as an opportunist who would trade what was left of Lebanon’s integrity for a place in the history books.

In reality and with hindsight, he has not done a terrible job. He has advanced the Special Tribunal for Lebanon (despite the Syrian dream of killing the process altogether) and spoken out against Syrian violations of Lebanese territorial integrity.Given the fact that he has had to work with a cabinet of which Hezbollah and its obstructionist allies in the FPM are a part, he has made a decent fist of holding things together.

Hollande and the rest of the international community are right to condemn the current government, which has set new standards in uselessness, but we should avoid throwing the baby out with the bathwater. With the exception of former Prime Minister Fouad Siniora, Miqati is arguably the best candidate we have to lead this country in troubled times.In the meantime, the Lebanese must fight to wrestle their destiny from the hands of those who see Lebanon as a strategic asset instead of a sovereign nation, and all our MPs, without exception, should show up for work.

Saad Hariri, it seems, cannot take criticism. Especially when it’s coupled with praise to his political adversary, which is beyond disgraceful. It seems that Saad Hariri is so worried about his political tenure, all the way from his Parisian lala land (be careful of the cold dear MP, I heard it’s quite chilly this time of year) that he pulled his strings all the way to Lebanon in order to pull the article off a website in which he has influence.

The fact that Saad Hariri cannot take criticism is beyond worrying. It’s also very childish. It’s akin to one of those impertinent children who run to their mothers whenever those “bad kids” on the playground don’t let them play. And this type of behavior is certainly not acceptable from the proclaimed political leader of one of Lebanon’s main parties.

The sad thing though is that this doesn’t only apply to Saad Hariri. Each and every Lebanese politician is off limits by some platform or the other – and what remains, at the end of the day, is an electorate who’s limited by the narrow political opinion it gets from websites that are censored by the politicians it thinks are the best of the best.

And they all run to their mothers crying. They seem to be missing one key element though: good luck silencing the internet.

The article is back up (here) with the following disclaimer:

Disclaimer: NOW Lebanon has intentionally removed this article from the site. It was not removed because of censorship, but rather because of the lack of proper arguments. We would like to repeat, again, that NOW is not owned, in whole or in part, by Prime Minister Saad Hariri, nor any other political party or figure.

Yeah, right. Such “justifications” are an insult to Now Lebanon’s reader’s intelligence. 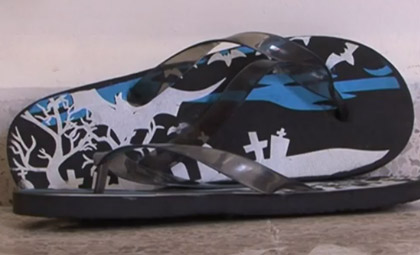 I’ve only been back to Lebanon about a week and the drama with the country’s religious diversity is back. This time, however, it has taken the form of a flip-flop.

This flip-flop in question had not one, not two, but even more than three Crosses on it. The attention to the issue was first brought by LFTV, the internet television of the Lebanese Forces, and soon enough the people of the concerned areas got the store selling these shoes, managed by Ali Fakih, to close.

I wouldn’t be writing this post if it hadn’t been for this article by Now Lebanon, brought to my attention via a retweet by someone who thought the reaction of the Christians was ridiculous.

1) Why was the store, managed by Mr. Fakih, selling such flip flops in the first place? Has it become fashionable to sell shoes where you step on a religious symbol all the time?

2) How is the Christian reaction to this in any way ridiculous? Did they vandalize the place? No. Did they beat the hell out of the manager? No. What did they do? They protested and got the shop to close. When will the shop re-open again? Monday.

3) It is sad, sometimes, that people who feel the need to talk about anything have a widespread platform like Now Lebanon to talk about it. How is it, miss Nassar, that forcing the man to close shop for a few days insulting? I’m not the most religious of people but I don’t want to see people stepping on Crosses as they walk. In my humble opinion, Mr. Fakih not caring enough to go through the merchandise that he sells is insulting. I’m pretty sure that if his store had received shipments of the same flip-flops, except with the Crescent on them, he wouldn’t have sold them.

4) To suggest that the same reaction wouldn’t have taken place against a Christian man is a deeply disturbing – and sectarian – idea on Now Lebanon’s part. Saying that the whole protest was fueled by people who only protested because the man selling the flip-flops is a Shiite Muslim is not only unfounded, but it’s also entirely in the realms of speculation. In fact, there’s little to back that point up. People, when offended, will act out – regardless of who’s offending them.

5) The article also suggests that us Lebanese have nothing to do but take offense to clothing items. I wonder, when did a clothing item make headline news? Not recently, right? Well, this is the first time that I hear of something “fashionable” cause up a stir. And if you think about it, it’s not really a huge stir. Christians of the area are now standing in front of the store, chanting.

6) Before Now Lebanon, in the form of Angie Nassar, apologize from Ali Fakih for this “sick charade,” how about they look at this “idiotic spectacle” from the perspective of someone who doesn’t want to write just for the sake of writing something controversial and actually notice that the response of the Christians of the area has been nothing short of civilized. They’re not “akin to dictators gunning down innocent men, women and children.” How this comparison was even conceived, I have no idea.

Every group in the world is allowed to express themselves when they feel offended and threatened. The fact that one of Lebanon’s major religious groups was offended by a clothing item and did something non-violent about it does not warrant people to call said people ridiculous, to write articles saying that closing down the man’s store for a few days is an insult and to ask for an apology from a tasteless individual who, probably, knew exactly what he was selling.

I wonder, however, and I do not mean to come off as sectarian, if anyone remembers the clashes that took place when LBC’s Charbel Khalil had someone impersonate Hassan Nasrallah on his show Basmet Watan. Shiites from Dahye swept into Beirut’s Christian areas and caused a riot. Is Hassan Nasrallah more important than the symbol that represents Christians? Was he even offended on LBC show? Nope. What was the cause of the riot? LBC isn’t allowed to portray someone of Nasrallah’s grandeur like that.

Do you also remember when some Danish newspaper published pictures of the prophet Mohammad and the Tabaris 802 Building in Achrafieh, home of the Danish Embassy, was vandalized? How are those pictures any different from having a Cross on the bottom of a shoe? If anything, I find the Cross even more offensive.

How is a civilized reaction from Christians of the area, that only led to the closing of a store, an “idiotic spectacle”? How is this spectacle driven by “willful ignorance, unreasonable attitudes and discrimination?”

Are people unreasonable when they ask for their symbols and convictions to be respected? Is it discriminatory if someone stands up for their rights? And in this case, I’m pretty sure willful ignorance does not apply – it would have applied had they known and decided not to do something about it, making it another example of Christians resigning to the status quo of the country.

And what better way to end this than with the same way Now Lebanon’s original article did: pro tip, fools: taking offense isn’t always a choice. Also, stop being so clueless. It’s offensive to your readers.

A little confession miss Nassar, this event barely registered on my relevance radar – until I read your article. Good job.