Our lovely minister of culture just doesn’t let up. A few days after he authorized the destruction of a one-of-a-kind Phoenician Port in Downtown Beirut, he’s at it again.

This time, he’s defying a law by the Shawra Council, whose jurisdiction supersedes that of the minister, which doesn’t allow any works to be done inside the estate of the Roman Hippodrome, which I spoke about back in March.

MTV has gotten exclusive footage from inside the hippodrome, which is sealed off for the public, in the Wadi Bou Jmil area showing the dismantling process in full swing. It’s still in its early stages by the looks of it but this is downright unacceptable. And if a law can’t keep the real estate mafia from eating away at whatever heritage Beirut has, you can’t but ask: what will?

But no. The minister has other plans. The best use for the hippodrome would be the parking lot of a high-rise. And you know what the sad part is? Some people will ask: what’s the point behind a hippodrome? Should all of the ancient monuments in Beirut be kept?

And the sadder part is that the beyond evident and deafening “YES” to second question is not as evident and common as I had originally thought.

Minister Layoun should resign because the only ministry he’s being in charge of is the ministry of  un-culture. Let’s help strip whatever identity Beirut has and cash in a few millions in our bank accounts. Those will surely come in useful when he stops being minister and he leaves to some other country with his family.

I’d say I’m disgusted. But at this point, in this country, I’m simply amused. Destroy away. Destroy away. If your brain can’t tell you that you’re doing something wrong, how will anyone convince you?

Just a question though. How do these people reach power? Also, don’t you just love change and reform?

Back in March, I told you about two ancient landmarks in Lebanon that were facing an impeding threat by the fangs of real estate contractors, vying to destroy them in order to build fancy high-rises in their location.

Back in March as well, we marched in support for these landmarks. Many blogs spoke against their destruction. Many media outlets highlighted the government’s attempts at destroying these valuable parts of our heritage. We thought we had gotten somewhere.

Today has proven that we did not. Nowhere near that in fact.

This picture shows bulldozers working their way around a 4000 year old Phoenician port earlier yesterday, tearing it down stone per stone. 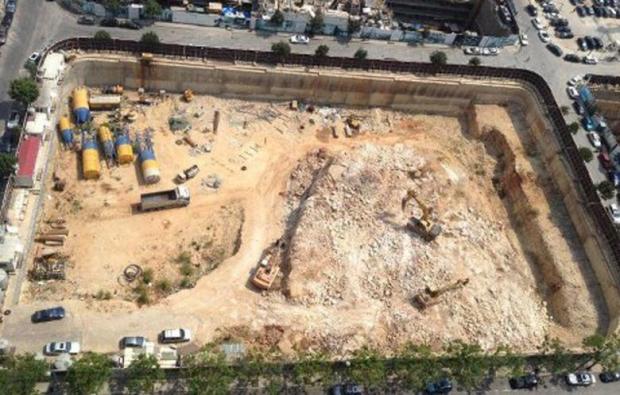 An agreement was supposedly reached with minister of culture Gabriel Layoun so the destruction of the port came as a shock for many – a bulldozer hitting them in the fact, out of the blue. The government had been talking about a mitigation approach, which I had previously explained to be a way to preserve ancient sites while making way for new development.

Even that did not happen with the Phoenician port. It was simply destroyed in its entirety.

Minister Layoun said that the site had been removed from the list of protected sites in Lebanon and as such this act is in no way backing the law. Previous ministers of cultures, such as Salim Wardeh, Tamam Salam and Tarek Metri, had worked relentlessly on protecting these sites.

It all came crumbling down with Layoun.

What Layoun doesn’t understand is that for someone who supposedly calls for “change and reform,” this reeks of corruption beyond anything we’ve been exposed to before. How can a minister of culture rationalize a real estate company destroying an ancient site and pass it as another thing that happens? Is it every day that countries discover 4000 year old ancient landmarks on their soil?

How can Mr. Layoun expect us to be so gullible as to believe that this happened in a very innocent manner, not because the real estate company in question, in a country as corrupt as Lebanon in that regards, had substantial political backing, the type of which doesn’t care about identity but cares more about its bottom line?

I’d call for Layoun’s resignation and possibly that of the whole government with the incredibly atrocious job it’s doing at every single level possible. But where would that lead? Nowhere. A minister of culture who can’t see the importance of, well, culture is doing his job how exactly?

Out of all of the things we have problems with in Lebanon, this is perhaps the most troubling.

Electricity? It can be fixed.

Water? It can be provided.

Internet? It can be upgraded.

An ancient site demolished? It can never be replaced.

The land of the Phoenicians has one less Phoenician site to boast about.

Let’s hope we can save the Roman Hippodrome next to the Maghen Abraham Synagogue in Wadi Bou Jmil. 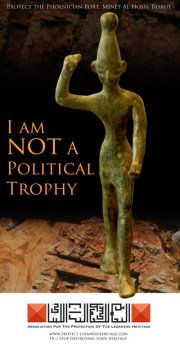 In case you didn’t know, current Ministry of Culture has allowed for construction to take place at the location of the Roman Hippodrome in Beirut. For full details, check out this link.

Before Beirut’s hippodrome made news, however, another heritage site of ours was in danger. A Phoenician Port, over 2500 years old, in the Minet el Hosn region in Downtown Beirut, just behind Monroe Hotel. Venus Real Estate intends to build three towers instead of the port. The location, protected by former Minister of Culture Salim Warde, was compromised when Venus Real Estate used the transitory period between governments and convinced current Minister of Culture Gaby Layoun that the port was dispensable.

Details aside, Association for the Protection of Lebanese Heritage (APHL)  is marching for these monuments this Saturday, March 24th. Check out this Facebook event for the details.

I’m glad to see Lebanese people becoming proactive when it comes to things like these. Will you be marching with them?