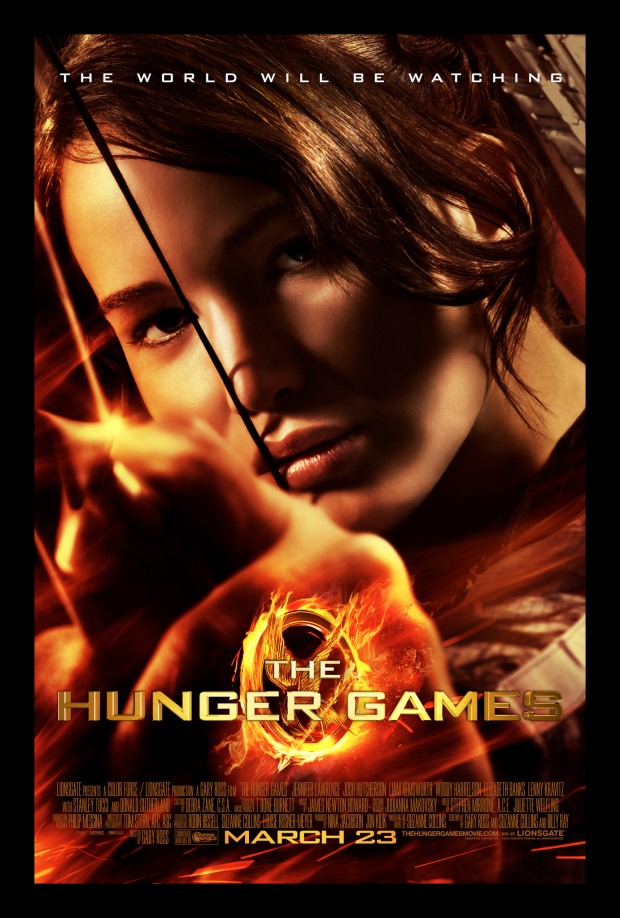 For legions of people, The Hunger Games is the most anticipated movie release of the year. And for a movie released so early in 2012, that’s saying something. Based on the book of the same title (read my review here), The Hunger Games stars Jennifer Lawrence as Katniss Everdeen, a sixteen year old girl living in a post-apocalyptic America where hunger and oppression ruled, where hunting for rodents was the way to keep your family alive and where every day represents a fight for your life.

This post-apocalyptic America is the country of Panem, governed by the Capitol which oversees twelve districts, making sure they are stripped down to the bare necessities. Those twelve districts had been thirteen that rebelled against the Capitol’s oppression. They lost the war and are still paying the price, the heaviest of which is the annual Hunger Games which require each district to send a young man and woman, for a total of 24, to battle each other to the death. There can only be one victor. “May the odds be ever in your favor” is the sentence the tributes keep hearing as if odds will help them on the brink of death.

When her sister is chosen, Katniss volunteers in her place and is taken along with the male tribute of District 12, Peeta Mellark (Josh Hutcherson), to the Capitol where they are groomed like lambs for slaughter in an attempt to make an impression which can make it or break it for them once the games fall upon them. And fall they do, with devastating consequences.

To see the Katniss Everdeen of your imagination after reading The Hunger Games books be incarnated so perfectly on screen by Jennifer Lawrence is a joy to the eye. Lawrence struts through every scene as if she was Katniss and Katniss was her. She exuberates confidence, sentimentality, fragility, innocence, worry, love and pain. Widely known for her Oscar-nominated role in Winter’s Bone, Lawrence is still in the same vein in The Hunger Games. This time, however, she manages to polish the sides of her performance, nitpicking until she truly becomes flawless. In Katniss, Lawrence gives you a heroine you want to root for with all your heart. It doesn’t even feel forced, it’s simply natural to feel invested in the primal force that Lawrence conveys to Katniss. And it is then that you realize the brilliance of Lawrence’s Katniss. She has managed to make her character one that is driven by principle.

Director Gary Ross manages to not let the movie’s extended run at 140 minutes affect it negatively. The Hunger Games doesn’t let down. It keeps picking up, bring in gut-wrenching revelations and action sequences one after the other. Ross uses the action of the movie to serve the characters, not drown them. He keeps the suspense going throughout. His camerawork is also highly interesting, with lots of focus on his characters’ faces, giving them a more humane appearance and seeing the struggles in them easily. Co-writing the movie’s script with the book’s author, Suzanne Collins, he stays true to the book’s essence. Even though some sequences have been shortened and some have been omitted, the feeling of the book remains there, present for you throughout to sink your eyes into.

At the center of the deathly games is a growing love triangle between Katniss, Peeta and Gale (Liam Hemsworth), a friend of Katniss from District 12 who’s lucky enough not to have been chosen as tribute. Liam Hemsworth quickly establishes himself as a forceful character, with the limited screentime he gets. Peeta (Josh Hutcherson) is highly relatable as the man secretly crushing over Katniss whose only memory of him is him helping her in a time of need. But the greatest triumph in this regard for The Hunger Games is focusing less on the love triangle than other movies targeting the same audience, making you really not care about either Team Peeta or Team Gale. At the end of the day, the only team you want to be on is the movie.

Other actors that appear in the movie are Stanley Tucci as Caesar Flickerman, a TV host that charmingly narrates the games as they unfold. Elizabeth Banks stars as Effie Trinket, a Capitol spokesperson who’s as obnoxious as she is caring. Donald Sutherland appears as the horrible President Snow, governing his country with a hand of steel. Woody Harrelson is the always drunk Haymitch who has to sober up in order to tip the balance in his tributes’ favor.

The Hunger Games is an unflinching adaptation of Suzanne Collins’ book. In many ways, the book was more suited for a screen adaptation because it is that fertile for the imagination. The movie does not falter. It’s a more serious movie than many might think it could possibly be. It is gut-wrenching at times and heavily sincere at others. It takes you on a roller coaster ride that you never want to let go of. In fact, not wanting to let go is most evident when, after 140 minutes, the movie suddenly ends and you remain in your seat wanting more. Fans of the book, rejoice. The Hunger Games does not disappoint at all. It’s a haunting tale that, coupled with a chilling score by James Newton Howard that serves as a brilliant auditory backdrop the darkest of scenes, will leave you mesmerized by how real it feels and how good it turned out to be. May the odds be ever in favor of The Hunger Games.
10/10

The Hunger Games is the first book in The Hunger Games trilogy by Suzanne Collins. It is already a top seller and will soon be released as a motion picture, being one of 2012’s most anticipated releases.

The Hunger Games takes place in the nation of Panem, in a post-apocalyptic United States. The state is divided into twelve districts, each of which is specialized in a trade, all centered around the Capitol. Each year, the Capitol holds The Hunger Games, an event to remind all twelve districts of their submission to the power of the Capitol. Why? A few years prior, there were thirteen districts with District 13 starting an uprising against the Capitol. The revolution failed and District 13 was eradicated and so arose The Hunger Games, whose is quite simple: a boy and a girl between the ages of 12 and 18 are selected as tributes through a lottery to represent their respective district in The Hunger Games. The  total of 24 candidates will then battle each other to the death, as all 12 districts are forced to watch their sons and daughters getting killed and killing. The winner gets a life of ease, which in the harsh world of Panem is almost tempting enough to enter the games. Some districts actually train their youngsters for the games.

Katniss Everdeen and Gale Hawthorn are best friends from District 12. They also have their names in the lottery more than once as a way to get food to their hungry families. Their chances for getting selected are rather high. But both their names are not drawn. Instead, Katniss’ sister, Primrose, is selected – with her name being in the lottery once. In a burst of courage, Katniss volunteers to take her sister’s place. Gale is also not selected and instead Peeta Mellark is chosen as the male representative of District 12. Together, Katniss and Peeta are taken to the Capitol where they will try their best to build an image that will help them while inside the games, not knowing that there’s way more going on behind the scenes than they know and that the slightest “wrong” move on their part will cost them dearly.

The Hunger Games is probably one of the most riveting books you might read. The action goes on at breakneck pace, not leaving any dull moment for you to take in what has passed or think about what might happen. You cannot let the book down before finishing it. I had to learn this the hard way with a major exam coming up and finding myself reading this book instead of my anatomy textbook.

Don’t let the fast pace undermine the book’s value, however. The book is perfectly paced. It doesn’t linger on sequences more than it should and, seeing as it’s a book about life and death, it doesn’t dwell on details that are irrelevant to the ultimate goal of its characters: survival. The text may become violent at points, but it remains hypnotizing and chilling.

Simply put,  it is one of those books, which are immensely suspenseful, that will get glued to the palm of your hand and refuse to let go until you turn the last page, only finding out that the story has not been fully resolved and you’ll have to read the second book, Catching Fire, to know what happens next. And before you know it, you have that book in your hands and you’re at it again. The Hunger Games takes you aboard its cycle and doesn’t let you go. Even the love triangle, which the author tries to set up, becomes irrelevant to you as a reader with everything else going on in the book.

At the end of the day, The Hunger Games, despite being totally rooted in fiction, has strands of real-life intertwined in it. There’s humor, there’s treason, there’s death, there’s love, there’s life, there’s loss, there’s pain. All in a couple hundred pages. A must-read, definitely.