As I’ve made it widely known already, I will not be overnighting to watch the Academy Awards this year for several reasons, the main ones being:

1) I do not care about any of the nominees in best picture. Meaning, I don’t give a rat’s a*s if The Help wins best picture or The Artist or The Descendants or Moneyball or any of the other nominees. Why? Because, despite some of them being good movies (The Descendants is atrocious and I couldn’t go through Tree of Life), they are simply nominated because academy members are a bunch of elitist snobs who couldn’t take a risk. The Artist is getting hype because it’s the first silent movie to be made in a long time (if it weren’t silent, it would have crashed and died), The Help is making the rounds because of its brilliant cast and captivating story. I have no idea why Tree of Life and The Descendants are nominated, to be honest, apart from the names associated with them.
Is it worth it to watch an award show from 3 AM to 6 AM when you don’t care about their top honors? Nope.

2) I do not care who wins best actor. Jean Dujardin, Brad Pitt or George Clooney. None of them have given me a performance this year that I feel is truly captivating enough for me to root for them beyond measure. Last year, James Franco delivered a tour-de-force one man show in 127 Hours that should have gotten him an Oscar. I had him to support. While I do have my preference, I still wouldn’t care if it goes either way, which means yet another reason as to why I wouldn’t want to tire myself by staying up all night for nothing.

3) Viola Davis or Meryl Streep? The million dollar question, as they say, for this year’s awards rounds. And yet, I don’t feel invested in any of them. Viola Davis was great in The Help. I have yet to watch Meryl Streep’s movie but everyone’s saying it’s a one-woman show, which is almost always the case whenever she’s present – regardless of how strong her supporting cast is. However, I haven’t been exposed to that one performance which absolutely blew me away, like I was with Jennifer Lawrence’s Winter’s Bone last year. If you haven’t watched that movie, you absolutely must. So as you see, with another one of the major awards becoming irrelevant to me, this turns up yet another reason not to watch.

4) Best director? Let’s pretend we understand all the technicalities that come with this. And let’s also pretend that Terrence Malick is not there because of his name and because academy voters usually worship at his altar. Let’s also pretend that Martin Scorsese’s Hugo deserves eleven nominations, including one for best director and let’s also pretend that Alexandre Payne is nominated because The Descendants is actually a good movie, which it most definitely is not, and not because he’s been away for seven years. And while you try to pronounce the name of Michel Hazanavicius, you’re left with him as the only one person who deserves it. However, I feel no investment in whether he actually wins or not. I really couldn’t care either way. I was invested in this last year because I was furious Christopher Nolan didn’t get a nomination. This year, not so much.

5) I tried to come up with a fifth reason and there’s no better reason than the fact that I didn’t bother with closing any of the major categories like I did last year. I haven’t finished watching all the acting performances. I still need to watch one of the Best Picture movies (Tree of Life doesn’t count). The one I still need to watch, Extremely Loud & Incredibly Close, has an aggregate score of 46% on Rotten Tomatoes and received mixed to negative reviews at best. The reason it was nominated? Probably its theme of 9/11 drama. Simply, there’s nothing about the Oscars this year that screams excitement. There are no breakthrough performances, no surprise nominations. The Oscars this year are a mess of safe choices that will go well with the history of the Academy and, in the long run, become forgotten as movies of the “it” moment that fail to garner considerable traction with the people.

Moneyball, based on the book of the same title, is a movie about a baseball team manager, Billy Beane (Brad Pitt), in his quest to build a formidable team that can go through the year long tournament. To do so, he enlists the help of Yale economics graduate Peter Brand (Jonah Hill), who has a theory that building a team not based on a player’s reputation but based on his statistical averages is the way to go. The idea proves tantalizing for Beane seeing as his team, the Oakland Athletics, has a very dismal budget to begin with. As he put it, “There are the rich teams, then there are the poor teams, then there’s 50 feet of crap, and then there’s us.”

So instead of splurging on A-list players, Beane hunts down players whose days are apparently behind them. Some have nerve injuries to their elbows, some are too old to play and others have a bad reputation behind them. The critics will rise against Beane and his experiment but he perseveres in an attempt to prove everyone wrong. Moneyball is based on a true story.

To say Brad Pitt delivers a tour de force performance as Billy Beane would be an understatement. I have not watched all the Oscar nominated actors yet but I can safely say that among all the actors who have gotten and are getting award-hype this season, Brad Pitt is without a doubt my favorite so far. He’s being pitted against George Clooney in The Descendants (check my review) as the frontrunners. No offense to George Clooney but Pitt’s performance is lightyears better. It is more engaging, more thrilling, more interesting, more nuanced. It is exquisite. He portrays his character with the exact amount of strength and emotion that it needs. At times, he shows Beane’s fragile side as he faces the looming fear of failure and at other times, as he sits in the changing rooms behind the stadium, he shows undeniable resolve. Sometimes he shows both in one frame. You can actually say that Moneyball is Billy Beane and Billy Beane is Moneyball. The symbiosis between this character and the movie is that strong. Brad Pitt embodies Billy Beane perfectly.

Jonah Hill is very interesting as well as Beane’s assistant. His performance has been rightfully nominated for many awards, including an Oscar. In fact, one of the driving forces for Moneyball is the chemistry exhibited on screen by Brad Pitt and Jonah Hill’s characters. Philip Seymour Hoffman, as the Athletics’ manager, is great as always in a more silent yet comical performance.

Moneyball has a great screenplay as well, as only can be expected from The Social Network‘s Aaron Sorkin (check my review of The Social Network) and Steven Zaillian, responsible for this year’s The Girl With The Dragon Tattoo (check my review), to accompany the all star cast it enlists. The movie flows smoothly, never feels slow. And for a movie about baseball, a sport that I don’t particularly understand, it rises above the toughness of the game and turns this movie into one that is truly heartfelt, comical at times and entertaining throughout.

At the end of the day, Moneyball isn’t a movie about baseball as it is about changing the game, defying the system and breaking the boundaries imposed by other people on you. It is a movie that defies the baseball genre in which many people categorize it and rises above every single other baseball movie ever made. In fact, Moneyball might even be the best sports-related movie ever made because it doesn’t dwell on the technicalities of the sports it portrays, it rises above it to show a humanitarian aspect that everyone can relate to. 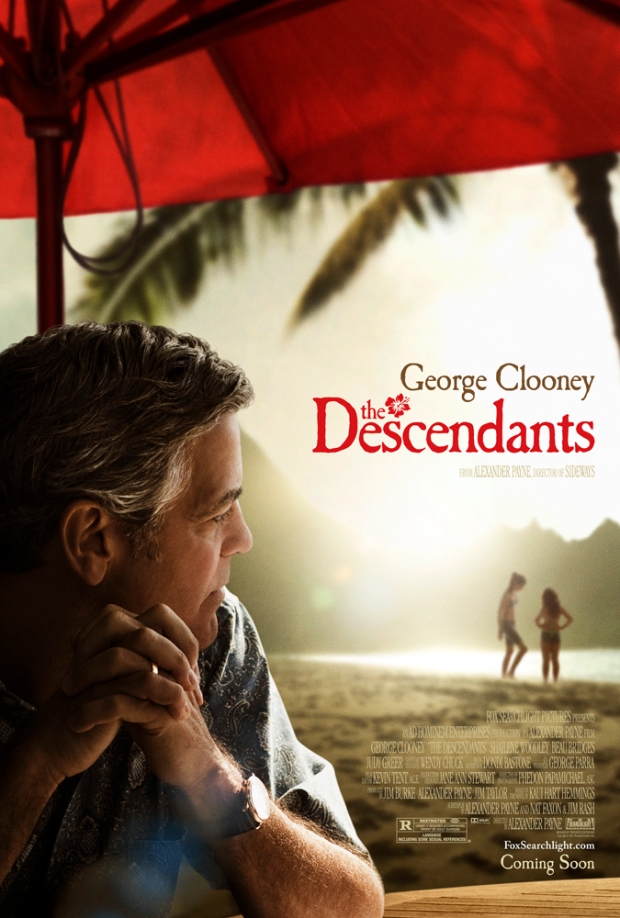 Alexandre Payne’s first movie in seven years is about Matt King (George Clooney), a Hawaii based lawyer and the trustee over his family’s pristine lands, worth in the billions of dollars, as they are about to sell. However, tragedy hits Matt’s family when a boating accident strikes his wife Elizabeth and she becomes comatose. It is then that Matt has to deal with his two daughters Scottie and Alex (Shaileene Woodley in a brilliant role), except that he always thought of himself as the “backup parent.” And after learning that his wife will never wake up, Matt has to set out on the path to say goodbye.

But as Matt’s older daughter Alex reveals, her mother was having an affair with a real-estate agent named Brian Speer, with the intention of asking for divorce. The Descendants then becomes Matt’s obsession with finding Speer, to see the man who was taking his wife away from him and to allow him the chance to bid her farewell.

Telling it like this, The Descendants seem like a true tear-jerker, right? Well, no. The movie is flimsy. This is a movie that wants to confront painful truths about love, loss, family, yet there’s a sense of emotional brittleness present throughout. It attempts to build itself as an emotional tour de force for the viewer but comes crashing down without satisfying neither itself nor the viewer in question. Even the scene, which is supposed to be the movie’s highlight, of Matt talking to his comatose wife, seeking catharsis, ends flat amid all the emotional dryness of the previous acts.

Perhaps The Descendant‘s biggest mistake, of sorts, is the fact that you can’t relate emotionally to the movie’s centerpiece: the wife who’s dying. After learning that she was cheating on him, you get disconnected from her character and, in a movie that is almost two hours, there isn’t enough character development to let you perhaps give her a reprieve, even as she lays in the hospital bed on life-support.

George Clooney’s character is extremely like-able. His performance that drives this character is top notch, nuanced and engaging. And yet, you just can’t bring yourself to care for anything he does, which is more of the shortcomings of the story around which his character is built. The story alludes to his shortcomings as a father, husband, and yet never showcases them. He is the man hurt by his wife’s betrayal as he tries to say goodbye and deal with the responsibilities his new situation has forced on him. But it’s just not convincing enough. The movie is centered around him. You end the movie not knowing anything more than what you did as the movie started.
And it’s just that… The Descendants may be a good movie in absolute value but its heart and your heart regarding its characters are as far apart as it can get. It tries to be sentimental but it turns out to be comical. And when it tries to be comical, it comes off as satirical. I doubt Alexandre Payne wanted his first movie in seven years to be such a mess. It’s a shame, really, especially with all the acclaim it’s been getting.