Oh so close. We almost dropped out of the top ten this year, but no such luck.

After all the hassle secondary to our General Security deciding out of the blue that a good bunch of the country’s passport would no longer be functional, it’s safe to say that apart from that useless bureaucracy, very minimal improvement has occurred to the state of our travel document over the past year. After all, how could it given that the only semblance of governance we get is when Saudi Arabia is upset at us?

Henley & Partners, the world’s leading Citizenship research consultancy firm, published their yearly report about passport strengths – the same one that gets us upset every year – and we’re at #96 when it comes to the worst passports of the world, in a list that tops at #104 with Afghanistan. We share the #96 spot, which translates to the 9th worst passport in the world with Bangladesh, Congo and Sri Lanka.

The bottom 10 is as follows:

Meanwhile, a slew of European and American countries top the list with passports that give them access to more 170 countries visa-free. We are allowed access to 39.

The highest ranking Arab country is the UAE at #38 with a passport that grants them visa-free entry to 122 countries. The highest ranking regional country, however, is Cyprus at #17 with 159 visa-free country, bolstered by the fact it’s in the European Union. Our enemy to the South, meanwhile, comes in at #25 with around 147 countries its citizens can enter without a hassle.

The situation is not that bleak, however, because our passport rank has actually gone up from last year, mostly because a bunch of countries fell below us such as Syria, South Sudan and Iraq: 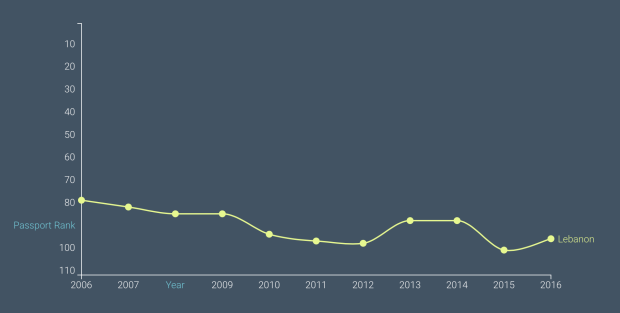 We have, however, gained two more visa-free countries to travel to in the past year, up to 39.

There’s nothing more indicative about how being born somewhere is detrimental to your “worth” as a person as the hierarchy behind passports, a yearly reminder that if you happen to come from a place that is not Europe, not America, and not completely in the good graces of either of those two entities, your worth is inherently lower.

But that’s not the full explanation behind how low our passport and citizenship ranks. This rank is a reflection of the unstable political situation in a country that hasn’t had a president in almost two years and doesn’t seem like it will have one anytime soon, hasn’t managed to vote for a parliament in over 1000 days, has garbage piling up on its streets, has one of the most incompetent ruling classes to exist, has a militia roaming its lands with the ability to shake the country up at will (as in protests because of a caricature on a TV show).

Look at the UAE. A few years ago, they had only access to 64 countries without visas. In 2016, their citizens can visit double that number. Why so? Because their ruling class – new-age dictators and whatnot – have a clear vision for a future that enables their citizens to be the best version of themselves (within the limited freedom confines offered of course). We can make fun all we want of how fake Dubai is, of how silly it is to have a “Happiness” minister, but the fact remains that not only are Emiratis leagues above us now, they are also in an upward trajectory while we slumber in our lower ranks content that we have real snow and not a fake slope built inside a Dubai mall.

What can we do to fix this?

We need to be more aware citizens. We can’t bury our heads in the glories of days past and pretend that is a representation of our present. When the time comes to vote, we shouldn’t go back to what we know thinking it’s what we need – we need to see that there are alternatives to the parties that have been ruining our lives for years. As long as our politicians keep getting a blank space from us to do whatever they want, they’ll be content with keeping a status quo that enables them and disables us, including a passport that forces everyone to stay put – unless they were lucky enough to have a second one on the side to use at will.

It’s all about our passport lately, isn’t it? And isn’t it quite odd that our passport is being discussed so fervently by almost everyone given that the news that is seemingly new is actually anything but? I remember writing about it way back in July 2012 and nothing has changed since, as is expected obviously (link).

Well, there are two interesting reactions to observe regarding the latest non-original news about the Lebanese passport. The first is by some Lebanese regarding the ranking of our passport, a reaction that you can observe via the comments on the list that had us ranked in the ten worst passport list, which I’ve screenshot in the following gallery:

Lebanese people sometimes miss the bigger picture. Well, in the case of the aforementioned comments, the big picture was missed alright for the sake of a picture. Our passport sucks? Well, I guess that’s okay some Lebanese would say as long as the you show our girls rocking Skybar and our men holding their favorite alcoholic drinks and flashing their million dollar smiles to Beiruting cameras. It’s also the case with all those Lebanese feel-good short movies that give everyone a happiness boost to get them through a day. Denial can go a long way.

Of course, denial is what the second reaction to our passport ranking is all about as well but it’s at a higher level as Lebanon’s General Security apparatus had an official statement on the matter that went almost as follows: Nope, nope they got it all wrong. This is what happens when things get lost in translation. Our passport is actually one of the best!

I’m not kidding. The official text, as translated by yours truly, goes as follows:

“Some news platforms have incorrectly translated a report labeling Lebanon’s among the top ten worst passports in the world, which affected Lebanon’s image. In fact, the Lebanese passport is among the best in the world and will soon adopt biometric standards which provides its holders with more benefits, making the Lebanese passport similar with international standards.”

I didn’t know the merits of a passport were contingent upon the way it is. To tell you the truth, I have no idea what General Security mean by whatever they wanted to say. Is our passport awesome because of its navy blue color? Remind me to consult with some fashion expert and see if navy blue is in.

Is our passport awesome because it has a golden cedar on it? But I thought those cedars were being uprooted in Bcharre for the wedding of a former MP’s son. Is our passport superior because it’s expensive? Lebanese logic seems to dictate as such.

Is our passport grand because its first page tells its holder that losing this document is punishable whereas most other countries inform their passport’s holder that they would go to the ends of the Earth to defend them? Our security apparatus would definitely think that is great.

Except, of course, a passport’s merits aren’t in the way it looks, its size or the feeling it has in your hand or how efficiently it gets scanned at border controls. But don’t tell people that because we can twist any simple data we have into whatever gets us to sleep better at night. Let’s call it a way of life. Let’s call it perpetuating the status quo. Do Lebanese really want to improve their passport? By the looks of it, many of them probably couldn’t care less.