As expected, both Nicolas Sarkozy and François Hollande advanced to the second round of the French presidential elections to be held on May 6th.

According to official results, Sarkozy got 26.1% of the votes while Hollande got 29%. The current polls show the Socialist Hollande leading Sakozy 54% to 46% for the second round. The shock of the night, however, was a huge score by the woman of the French “Front National” Marine Le Pen who managed to break the two-party dichotomy of France by getting 18% of the votes, according to the latest results.

Her score will come as a headache for the socialists who are deciding to round cloud nine up until May 6th. If Le Pen endorses Sarkozy, all bets are off. 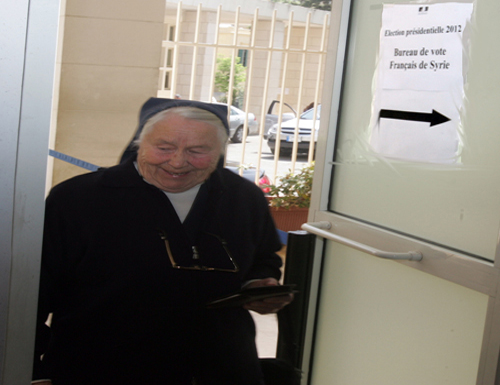 On the other hand, Marine Le Pen got 9% among French-Lebanese voters, almost double what her father managed in 2007 in Lebanon but still less than the result she got in France.

All foreign territoires put together have Sarkozy ahead of Hollande at 38% to 28.31%. Marine Le Pen came in fourth with 5.34%. The total participation in Lebanon is above the average for French expats, which settled at 40%.

Altogether, here’s yet another elections where Lebanese voters who hold a second nationality go with a right wing candidate.

5 thoughts on “The French Presidential Elections – Round One: How Lebanon Voted”