Crazy people with a platform. Hello bad side of the internet.

One of my Facebook friends shared this picture on my timeline with a sarcastic comment to show their corresponding disdain of its content. And I’m sharing it here for two purposes:

1) Comedy is needed these days.

2) Sometimes calling groups on their stupidity is needed.

The Egyptian Islamic Popular Association (or my translation of Alrabita Alsha3bia Almasriya el Islamia) has decided to call on people to stop eating tomatoes because it’s a Christian fruit which holds the Cross in it. Wait, there’s even a picture! 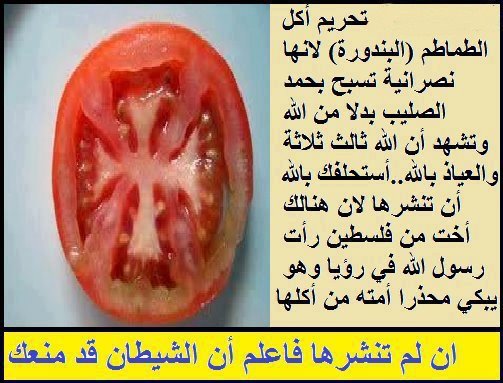 Praise Jesus! He is risen in a berry!

The translation goes as follows: “Eating tomatoes is forbidden because it’s Christian, praises the Cross and calls on you to worship three gods and not one. We beseech you to share it because a sister in Palestine saw the Prophet in a vision crying and warning his nation of eating tomatoes. If you don’t share it, know that the devil has forbidden you.”

The devil. We don’t want to upset that now, do we?

Their Facebook page, which you can access here, supports Mohammad Morsi for the Egyptian elections. They’re also happy that Shakira has converted to Islam and they have the picture to prove it. You don’t believe me? Here’s a screenshot of that:

That’s not Shakira… or is it?

Meanwhile, the tomato post has a caption which calls Christians a blasphemous bunch (Kuffar), about 2700 shares and 1200 comments. The good thing is? Many of those comments are calling it as it is: retardation.

As for me, I’m classing this under humor.

6 thoughts on “Beware! Tomatoes are Forbidden for Being a “Christian” Fruit… So Says an Egyptian Islamist Association”