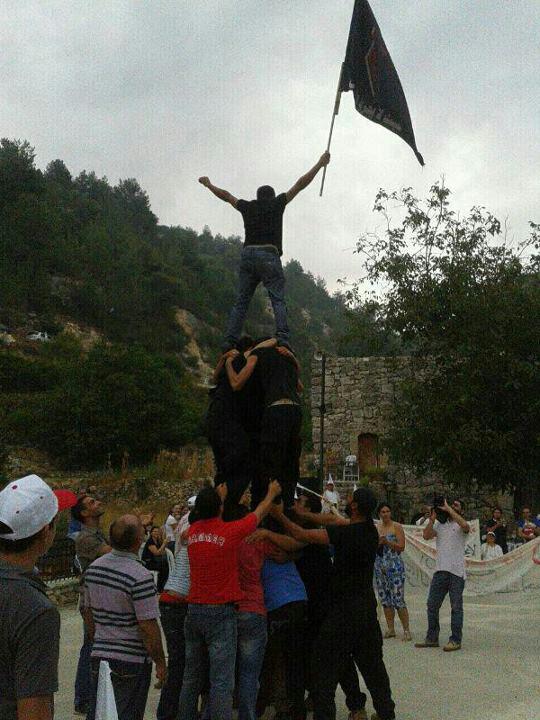 Some LF supporters protesting against the visit in Elige yesterday

Michel Aoun is visiting Elige. A headline that, in any normal setting, would just be that: something to get the press to talk.

But this is Lebanon and Michel Aoun visiting Elige, a convent in Jbeil where many Lebanese Forces martyrs are buried, sparked immense controversy among Christians first and foremost.

He is not allowed to visit and desecrate the place VS he’s going there ghasb 3annkon.

My readers already know that when it comes to how I lean, Michel Aoun doesn’t get my vote. And I’m definitely not voting for his party next year. But regardless of me preferring the Lebanese Forces over his party, there’s something that I felt gnawing at me yesterday as I contemplated the Elige dilemma. And it is hypocrisy.

The Lebanese Forces are hypocrites when they ask everyone to put their war crimes where they belong – in the past – but they cannot do the same for the war crimes of others. I, for one, am sure Michel Aoun did not kill most the martyrs buried in Elige and I’m also sure he wasn’t a civil war saint either as his supporters would love to potray him. Michel Aoun may have spoken harshly against those martyrs before. He may have humiliated their memory and he may have been a “Michel Aoun” about them. But that’s on him. And if he wanted to visit their graves to pay tribute and maybe – just maybe – apologize for what was said against them (you know that would work well with his electoral plan), then what’s the harm in that?

Lebanese Forces supporters should know how well Samir Geagea’s apology played out. He’s the only politician so far to have spoken in such a way about the civil war.

The problem with many Lebanese Forces supporters is that when you speak out the words Michel Aoun to them, their blood pressure starts to rise. It’s the same with those who support Aoun when you say those two syllables… Geagea. You see them throw a fit even worse than that of an Lebanese Forces supporter. You see them shiver and inundate his supporters with all kinds of stereotypes. According to them, I am an illiterate high school dropout .

The divide between the supporters of both groups is way too great and it has never been more obvious than with Aoun’s “planned” visit to Elige. However, the Lebanese Forces cannot simply ask everyone to get over the “Geagea is a murderer” stereotype (one that I, for the record, do not agree with) while they have no problem hanging the dirty laundry of others for everyone to see if it serves some purpose that they think they have.

He who lives in glass houses shouldn’t throw stones.

The Lebanese Forces are also hypocrites on another front: had one of their allies, say Walid Jumblat, decided to visit the martyrs at Elige, would they have reacted in the same way? One would say Jumblat’s party has killed way more Christians than Aoun. But I’m not a civil war expert so take that with a grain of salt. And for the record as well, I want to keep my civil war knowledge as limited as possible for the time being. Odds are the Lebanese Forces would have saw Jumblat’s visit as a great step towards national unity. But not Aoun’s.

And let’s assume in a hypothetical scenario that in the coming few months Samir Geagea decided to have an electoral tour in Zgharta. The Lebanese Forces supporters there, fewer than those who support Sleiman Frangieh, would want that visit to happen. And yet the same outrage that was sparked with Aoun’s planned visit to Elige would happen. The Lebanese Forces supporters would be on the other side of the debate right now. Now, ponder on this: would you have wanted Geagea to go there or not? If yes, why can’t you extend the courtesy to someone else?

The Lebanese Forces are proud of going “7asyou la yajro2 l akharoun.” They should have done that regarding Elige and actually did what others wouldn’t do unto them: let it pass and let the people judge.

It is sad that in 2012, almost all parties are still ready to use up civil war arguments to prove a point to their supporters. The Lebanese Forces supporters are now proud that they stopped Aoun’s visit. The Aounists now hate those war criminals even more. The idea that those “ze3ran” are the reason the country is ruined is at all time high in their minds. It is said the civil war has become in the past. Elige would most definitely disagree with those who say so.

9 thoughts on “The Hypocrisy of the Lebanese Forces”