While politicians from Lebanon’s two main political camps bicker over an electoral law they can’t wait to disagree upon, the campaigns to kick off the 2013 election season have begun with “Khlosna Ba2a” – Enough is enough.

The main party behind the campaign is the National Dialogue Party (NDP), spear-headed by engineer and businessman Fouad Makhzoumi who’s a known philanthropist.

The campaign aims to show what I think the majority of Lebanese believe and it’s our utter disgust at the current situation of the country: corruption, immigration, violence, dismal economical prospects, lack of proper dialogue, entrenched sectarianism. And the list goes on.

While I believe that such campaigns, similarly to Take Back Parliament, should have been started a long time ago and not only a few months before the elections in order to rally people and have a functional grass-root movement to get their votes, it’s still nice to see that there’s at least potential for alternative candidates spread around the country who would run based on qualifications not based on how big their family is or how faithful to a corresponding party they are.

Either way, I believe that the coming few weeks will start seeing more electoral campaigns kicking off as the electoral law should – theoretically – be known by then. And I believe the least we can expect is interesting slogans. The least we can hope for is less “Sois Belle et Vote” this time around and more intelligent messages such as “Khlosna Ba2a.”

Here are the other ads in the campaign so far: 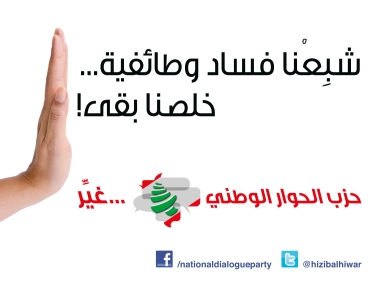 We’re sick of corruption and sectarianism. Enough is enough.

Our only option is dialogue. Enough is enough.

We want to stay in Lebanon. Enough is enough.