Hezbollah’s practices towards Lebanese citizens, whose protection theoretically justifies the party’s entire existence, have been nothing short of unacceptable lately, especially against Lebanese Southerners who became outspoken against some of the party’s practices.

Imagine the following scenario: you live in a town in Lebanon with a predominant political affiliation. The party in question decides to do something with which you don’t agree and you decide to speak out. The next thing you know, you are thrown out of your house and forbidden from returning to your hometown or even attacked on your way home.

This is Hezbollah’s did with two Lebanese Southerners Shiites who dared speak against its involvement in Al Qusayr or against the party in general.

The case of Rami Olleik was always baffling to me. He was a militant Hezbollah member, swiftly rising among the party’s rank, until he came to believe that the party’s entire ideology is wrong. He wrote a book about it, which I’ve read, and is now teaching at AUB. I always wondered how Hezbollah let Rami Olleik run wild for so long. Well, not anymore.

On his way back to his Southern town, Rami Olleik’s car was attacked by military men and he barely escaped to return to Beirut. 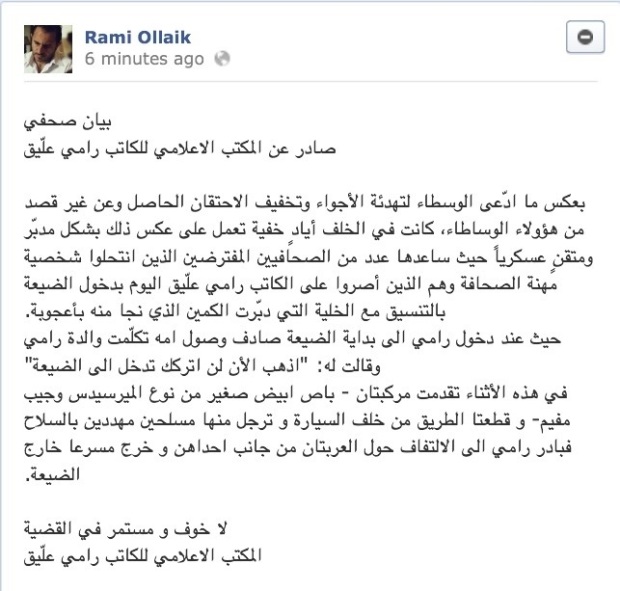 Rami isn’t the only Olleik who was targeted recently. Marwa Olleik is a young 20 year old girl from the South who was banned from returning to her town by the same party that her some of her family members support and are even active in. All because she wrote on Facebook how she wasn’t represented by the party’s actions in Qusayr.

She woke up to find the furniture on her house’s balcony burned. Fliers started spreading around town to boycott her dad’s business. Meetings went on till 3AM in order to get her to apologize took place. Facebook pages were started to tarnish her reputation. Slander against her started, all revolving around her and “Al Sayyida Zaynab.” Once she left her town, she got phone calls to stop criticizing Hezbollah and the Syrian regime so she could return home. This girl is afraid to go back home to see her parents. She’s even afraid to go back to class due to her university’s location.

And I’m sure there are some Lebanese out there who can only think one thing now: Kharjon.

And what’s worse, there’s no one to really fight for the rights of Rami and Marwa Olleik because there’s no entity in this country that can really stand up for Hezbollah’s hegemony and power.

Your freedom of speech in Lebanon is contingent upon many things. Let’s add Hezbollah to the list of entities that Lebanese Southerners specifically, the same people this party liberated from Israeli occupation, cannot speak out against or else they’d have no home to return to. Behold the neo- dictatorship (as to not use the word terrorism) of the party of Allah against fellow Lebanese whose only fault was to speak their mind. How is this any different, exactly, from the practices of foreign armies occupying lands that isn’t theirs?

Here’s hoping the Hezbollah’s next liberation is that of its mentality. Allah sure knows how much that is needed today. And here’s to every single Lebanese Southerner who is forming his or her own resistance, a resistance for thought and freedom.

4 thoughts on “The Neo-Dictatorship of Hezbollah: Rami and Marwa Olleik”