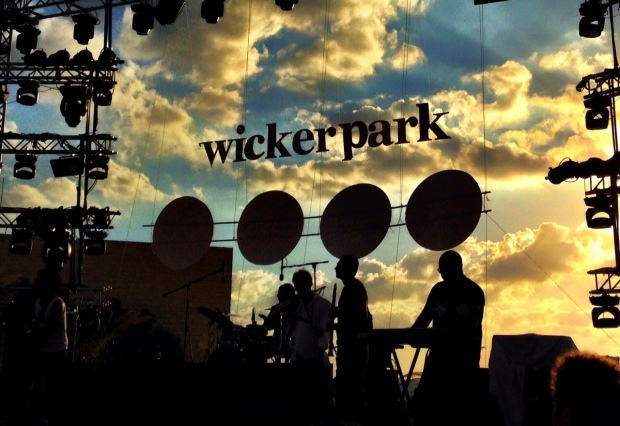 I was talked into going to Wickerpark yesterday. Sure, it was almost literally taking place next door. Sure, it was only $20 for an entire music festival of sorts. Sure, it was for a good cause. But it was a place for music that I had come to brush off. And I refused to be sucked in.

I absolutely loved these people. Of course, they’re  right up my musical alley of folk music. But their songs are really well-written. They perform those songs extremely well. I never thought I’d use such a word to describe anything but if there was anything to be described as “organic,” it’s them singing by the sea a song called “Lakehouse.” Granted, the Mediterranean isn’t a lake but as they belted “come home” to the echo of the waves crashing behind them, I was simply mesmerized.

Postcards covered a song by Fleet Foxes as well. Yes, I know who those are. And their cover was impeccable. Their EP was released less than two weeks ago and I couldn’t wait to buy it off iTunes. I’d love to see them cover songs by “The Civil Wars,” so in case they read this: make it happen!

You can buy their EP here and check their Facebook page here.

How cool was this guy? He was apparently globe-trotting around Europe before heading to Wickerpark, performing gigs all across Paris, Prague, Berlin, etc…. His music is folky, akin to Postcards. I especially liked the one about a girl’s “velvet garden.” Don’t fret, there’s nothing overtly raunchy about the material. Rayne is an excellent guitar player. He was the only act to command the stage solo. If you like Philip Philipps’ songs, Rayne is your Lebanese version.

I have to admit, this band was intriguing me the most about Wickerpark. I had never listened to their music before but wrote about them having their visa to the UK refused. Thank you Lebanese passport! After yesterday, I have to say that music festival in the UK they couldn’t go to definitely missed out.

They reminded me of the few songs I knew by The Black Keys. Their music isn’t my cup of tea though I’m warming up to such music lately. What drew me to them, however, was the sheer energy with which they performed. That energy is something to behold. They played with a multitude of instruments on stage seamlessly, never missed a note and their lead singer could play that harmonica forever despite him being such a smoker he couldn’t not do his set without a cigarette.

Why the hell aren’t they more popular?

Yes, I know asking that question puts me on all the Lebanese hipster watchlists. But I can’t not ask it: why aren’t Postcards, Charlie Rayne and Wanton Bishops as known, if not more, than other Lebanese bands, some of which are are dubbed “revolutionary of arab pop” with horrible enunciation to boot?

It’s not like Lebanon doesn’t have the platforms to truly launch their careers. We have four english-music radio stations. They all play the same music. On weekends, three of them play the exact same house music endlessly until your ears start bleeding – unless, of course, you’re a house music fan. None of those radio stations, however, give a shot for these local acts who are truly doing an enormous job given whatever limited resources they have. How many bands have you heard of get their visas for musical festivals rejected?

You’d think though that Lebanese radio would try to put Lebanese acts in the spotlight more often. I guess not. Perhaps they think we like to listen to Applause in a loop 24/7.

It may not matter much, but Lebanon’s indie scene gained an extra fan in me yesterday.

This entry was posted in Lebanon, Music. Bookmark the permalink.