I was invited today to the press conference that’s announcing the new tariffs for Lebanon’s upcoming telecom upgrades.

At the Ministry of Telecommunications is now various posters to hint at the upgrades which will be announced in a few. So as a first taste, find the following picture: 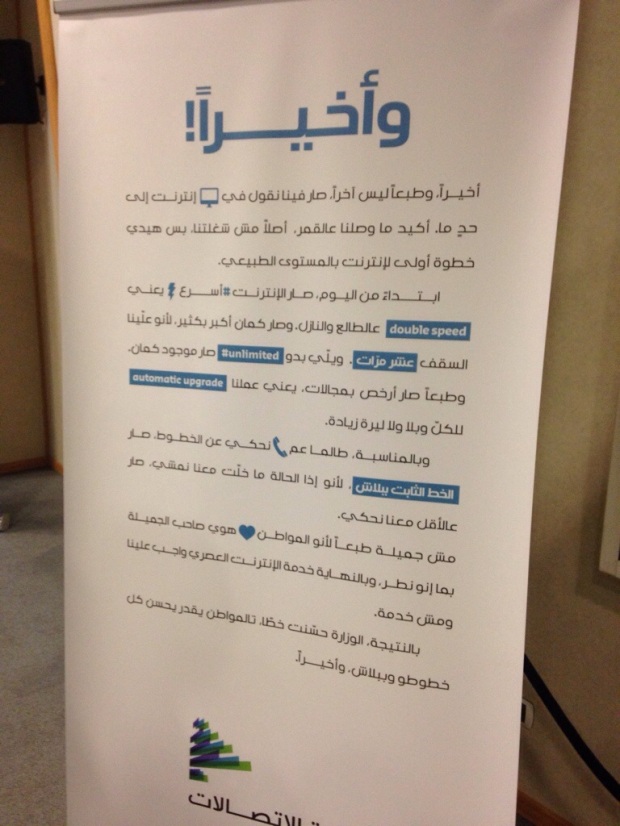 So what we know so far is the following:
– We will have unlimited internet bundles,
– Postpaid lines won’t require a $15 per month connection fee,
– Speeds are to be doubled.

A few minutes post national anthem, an introductory speech is announcing new 3G and DSL plans as well as reduced phone rates will be introduced, followed of course by a lot of compliments toward Minister Harb, calling him a true man of reform. I will exclude political propaganda herein after.

– Postpaid customers will get 60 free minutes for the $15 they paid monthly and got no services for.

– Some of the 3G bundles will have up to 3 times more quota and maintain the same price.

– The unlimited internet plan will have a speed of 2Mbps.

– The rates will commence on July 1st, not June 1st as previously announced.

– Only 44.5% of people with fixed lines have a DSL subscription, with a clear correlation between the economical status of each Lebanese area.

– The following are the new DSL plans. Unlimited is, as was leaked last week, for 75,000LL.

– Private ISPs (other than Ogero) will benefit from these as well though in different forms. Their plans will be dependent on what they want to offer but from what I gathered, the new plans were given to give Ogero an edge.

– I personally asked the minister if current unlimited night quotas will be preserved and he said yes.

– I asked if the upgraded speeds will affect areas where current maximum is only 1Mbps and Abdul Menhem Youssef said yes.

– New prices to be implemented as of July 1st. The reason for the delay compared to the initial June 1st date is the fact that our government had to convene yesterday to ratify extra laws regarding the matter, thereby delaying the publication in the official gazette.

– We are at 88% penetration for the mobile sector in Lebanon, which is low compared to neighboring regions such as Bahrain where penetration is at 173%.

– Jordan, whose economy is closer to ours, has a penetrant of 158%. The cause of this is due to the exuberant prices of mobile services here.

– A Lebanese citizen pays 2.5 times the price for a minute on prepaid compared to the region.

– Lebanon has 20% postpaid versus 80% prepaid subscribers.

– Price reductions are including both postpaid and prepaid customers:

– Postpaid customers will get minutes now for the $15 they pay every month instead of not getting anything as mentioned previously.

– SMS has also been reduced as illustrated previously.

– These will be enforced starting June 1st, not July 1st which goes for DSL. 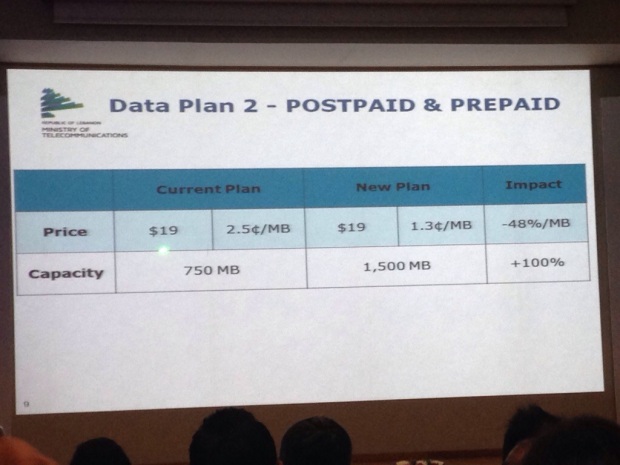 I especially liked how Boutros Harb acknowledged the work of both his predecessors in his speech. It shows that unlike what political propaganda wants you to believe, there’s a continuity in the work that previous ministers have put forth.

I did not like how the new DSL plans seem to give Ogero an upper hand. I thought the point was to give the customer better choices. Such choices do not happen when the best option is clear, without decent competition from other ISPs.

The new mobile data plans are great. The 5GB one is a real bargain and highly comparable to bundles in Europe. Our 3G speeds have also been highly reliable lately. I’d like to see such bundles become part of plans and possibly even have an unlimited bundle as well.

The new 60 free minutes for postpaid lines is also a vital addition as the monthly payment was deterring many, myself included, from making the switch as it didn’t make sense to make that monthly payment without any services offered back.

In my opinion, the new upgrades are great and essential to take Lebanon’s telecom sector the much-needed step forward into current age communications that are available elsewhere. I hope, however, that the next upgrades do not happen in 7 years as was the case this time, for that will set us back many years as technology advances at its current pace.

This entry was posted in Random. Bookmark the permalink.