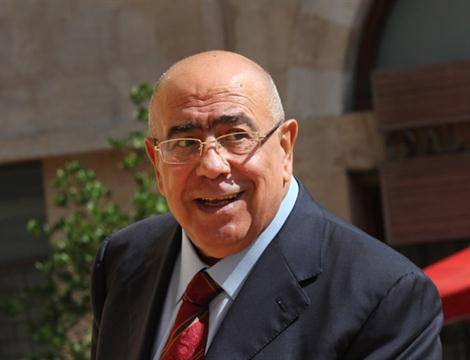 When it comes to Lebanon, there’s a lot of crazy that keeps going around. There must be something in the water. Scratch that. There’s no water for anything to be in it. So I assume it must be in the air.

A quick round on today’s quirky news reveals MTV’s twitter account getting hacked by pro-hezbollah goons who wanted to teach the anti-hezbollah network a lesson in resistance morals. Another round of crazy in Lebanon comes in the form of what I wrote yesterday, about guards in my hometown assaulting Syrians left and right, just because. But of course, as it is natural around this country, there would be something to steal the spotlight.

I swear, some things you just can’t make up.

The story goes as follows:

MP Nicolas Fattouch, of Zahle, known to be the one our government paid about 240 million dollars as compensation for shutting down his illegal quarries, was heading to the justice palace in order to file paperwork, I’m assuming yet another lawsuit.

The clerk there, a woman named Manale Daou, respectful and helpful as she is kindly asked the parliament member to wait for his turn. As it stands, Mr. Fattouch wouldn’t have it. “I am Nicolas Fattouch,” he said to her, “a member of the Lebanese parliament. I can’t wait.”

I guess some people are above the rules. Honestly, at this point I don’t know why any of us are even feigning shock, except the story gets better.

“Of course sir,” Manale Daou replied, “but everyone has their turn.” So naturally, Nicolas Fattouch took out his hand and proceeded to punch Manale Daou in her throat. Because she told him to effectively take a number, like a regular Lebanese citizen, like you and I are supposed to do every single day.

The employees at the Justice Palace then intervened to get the MP off of Manale Daou’s neck. Fattouch’s bodyguards came to escort him out of the building, then LBC reported on it.

And that, ladies and gentlemen, is how I’m sure many MPs, represented by Mr. Fattouch, view you as a Lebanese citizen: irrelevant, worthless, a nuisance, a hurdle, a throat ready to be punched, a voice ready to be squashed.

Other MPs are doing the latter by extending their mandate for a reported two years, yet again. They’re also suing people who dare speak up against their practices, using your tax money to drag you through a Lebanese circle of legal hell. Fattoush did the former, and will walk away unscathed, untouched, and possibly congratulated by his bodyguard, his people over in Zahle for being the epitome of Lebanese “roujoule,” not standing down to that pest at the Justice Palace. Women should know their place. Lebanese people should know their places.

In an ideal world, Manale Daou would be able to sue Mr. Fattouch for assault. And she would win. And she would throw him in jail for a few months, topped off with a hefty fine, which is only fair given the amount he was given out of our tax money for his illegal business’s demise.

In an ideal world, other MPs would stand against their comrade and denounce his behavior. Instead of calling for their next session to be about yet another renewal of parliamentary mandate, they’d call for a session to effectively strip Mr. Fattouch off of his diplomatic immunity, making him as vulnerable to the very fragile Lebanese law as people who aren’t immune are.

In an ideal world, what MP Fattouch did is considered political suicide. It’s an Anthony Weiner-level scandal, or even worse. At least the latter kept it digital. Mr. Fattouch would then never see the inside of parliament ever again, except on one of those tours that happen every now and then to show Lebanese citizens how beautiful the empty hall of that useless building is.

Enough with utopian paragraphs, I suppose. In corrupt, maimed, fragmented, despicable and fragmented Lebanon, there are varying degrees of inequality. There are those who are irrelevant, who view rules as something to make everyone’s lives easier, who think there’s a beauty to order and weep at its nonexistence over here, among other things. And there are those who are above standing in line, above the law, above being called corrupt and above facing repercussions for assaulting a woman in broad daylight, at her workplace, in front of her coworkers and leaving the scene without batting an eyelid. In today’s Lebanon, the only discourse pertaining to Fattouch will go as follows: Wayn yo? Just going about my day, bro.

You are irrelevant. Bask in the hopelessness.

Update: Manale Daou has reportedly apologized to MP Fattoush and a judge has reconciled the two. What a shame.