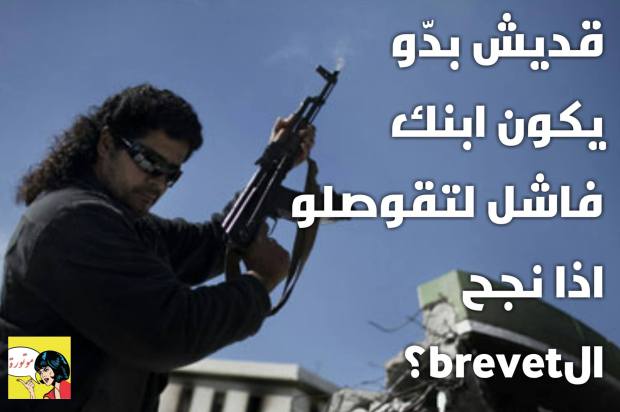 Dear Lebanese parents that couldn’t believe their son or daughter passed their brevet exam so they figured the best way to celebrate, in between the ten kilos of baclava consumed, was to fire a few rounds of M249 up in the air,

Yes, your child is special. I mean, how could your child not be special if he or she passed 9th grade and will continue to high school? In Neanderthal times, that’s akin to your child being ready for marriage or leading a life of his own! Yes, your child is unique, him and the other 75% of applicants that presented this year’s exam and passed.

Were you firing rounds up in the air because you couldn’t believe your child passed? You do know that doesn’t really reflect confidence on your part for your child’s capacities? I bet your child is going to grow up into such a terrific young man or woman knowing that his parents never truly believed in him or her and were utterly dumbfounded, a few AK4 rounds-dumbfounded to be exact, that they passed an exam that 3 out of 4 of those who take it actually pass it. If more information is needed, let me refer you to some good psychologists who will work on mending your child’s traumatized psyche from having his own flesh and blood not remotely believe he managed to pass an exam.

But how does this whole celebratory gunfire thing work exactly? I mean, you people seem to do it at every corner. Your child passes an exam, you bring out the riffles. Your politician goes on air, you bring out the machine guns. You manage to pass stools after a serious bout of hemorrhoids, you bring out the guns. Is there an algorithm you follow to delineate the mechanism behind this enigma?

Is it two rounds, for instance, for a simple pass grade? Three rounds in case all those “rachat points” were used as an “allahou akbar zamatna” hail Mary of sorts? What about those coveted “mentions” that were all the rave back in my old days? Did he or she get “bien” or “tres bien?” Did you fire thirteen rounds instead of six because your child got 230 instead of 196 points? I’m a doctor here who is more confused by the way your brain works regarding this, than by the diseases I have to address on daily basis.

Now tell me, what if your bullets end up killing someone? Is it okay because “fida hal brevet?” Or is it also okay because if God didn’t want him dead, he wouldn’t have died anyway? How do you convince yourself that your summer rains of shells are totally fine, wholly acceptable and utterly, irrevocably awesome to do?

Or maybe, just maybe, if you were a parent who felt the need to celebrate, for instance, their child passing an exam as stupid as a brevet exam, then you shouldn’t be a parent to being with? Maybe it’s the perpetuation of those genes that have a big contributory factor to why this country is a hell-hole, one round at a time?

I have so many questions that I hope you answer. Until then, see you in world war 3 next June when your other child graduates from kindergarten.