The town of Al Qaa in the Beqaa was the scene of a true horror show yesterday as 8 suicide bombers took to its streets to wreck havoc and spread fear among its people.

The town is home for around 2500 Lebanese, mostly Christians, and currently inhabits around 25,000 Syrians who came there seeking refuge from the war taking place in their homes. A few days ago, many didn’t know what Qaa was. Today, it is forever etched in our collective memory as the kind of mayhem that we can easily slip through.

Five people died in Qaa yesterday. Learn their names. Look at their faces. 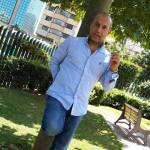 Over and over again, the need to see these people as victims and not martyrs couldn’t be higher. These are men who had families they wanted to be there for. None of them wanted to die. The only cause they were partaking in was to live, let live and provide for their families in a town that is forgotten by the government, and by fellow Lebanese, at the outskirts of a country whose Northern border many believe is Kaslik.

In a land of perpetual ironies, the biggest of those is definitely that Al Qaa was hit with terrorist attacks at night yesterday, four of them to be exact two of which were targeting the Church where many had gathered to plan the funeral of the victims, while the city was cut off the electrical grid.

Picture this: thousands of people in a small town that, a few hours prior, was witnessing the worst suicide bombing since the Civil War, not being able to see where the terrorists were coming from, who they were targeting or where they were fleeing to.

Picture this: thousands of innocent Lebanese, gathering in a town targeted by suicide bombers, who were not even given the prerogative of having their night of horror actually have a lamp light.

Maybe it shouldn’t come as a surprise from a governmental system that has failed over and over again and keeps excelling at failing, but let me ask this: if Qaa’s day had been in Beirut or Jounieh or any other “more important” place for the Lebanese collective, would that place go the night without electricity?

How do we go from here? We need to demand more out of our government. The Lebanese army is not supposed to use flare guns at night in order to see where the terrorists were coming from or fleeing to. Our people are not supposed to beg for light in order not to die in pitch darkness. The fact that after the day it had yesterday, the town of Al Qaa still had no electricity is disgraceful. The fact that after being the victim of 4 terrorist suicide attacks, and security officials asking the people of Al Qaa to remain indoors and vigilant, our government did not think that something might happen after sunset is horrifying.

This is not the time for hateful rhetoric. We should not, as a country, sink to the level they want us to, start pointing hands at people whose only fault was being a victim. This is not the refugees fault. They are not those to blame. This is not their attempt to “turn Lebanon Muslim” as I’ve seen many parade around. This is also not your chance to “bring the Crusaders back” as many seem intent on doing. This is precisely the kind of talk we should avoid.

This entry was posted in Lebanon and tagged Christians, Lebanon, Qaa, refugees, terrorism. Bookmark the permalink.